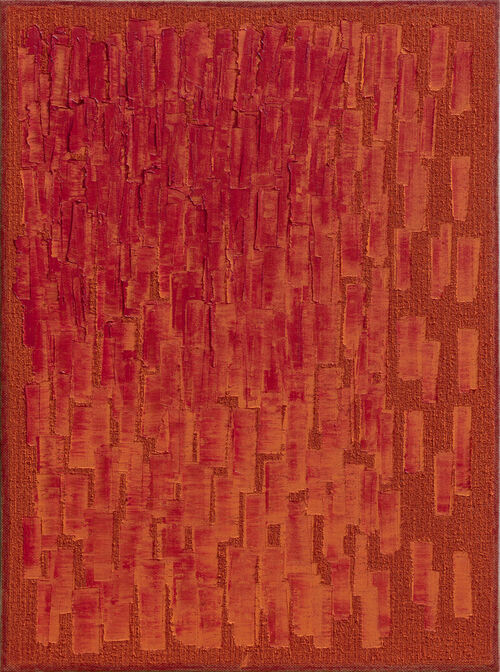 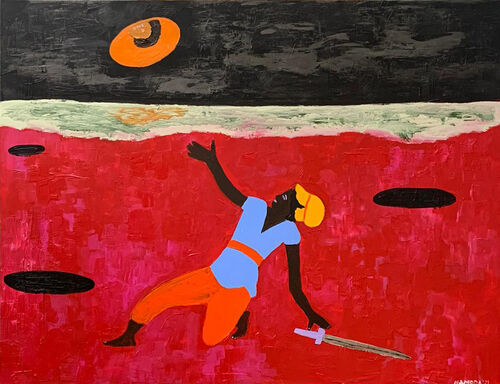 A Spiritual Declaration, Under the weight of it all, 2021.
Cassi Namoda
Goodman Gallery

This year’s Frieze New York fair seems destined to be remembered as the art world’s beachhead in a post-pandemic world. Fourteen months after the last in-person art fair in New York City and two years after the last edition of Frieze New York, the fair’s organizers proved that, with enough health and safety measures in place, people will turn up to see art in person again. And they did—collectors, curators, and assorted art lovers queued up outside The Shed at their reserved times, with fresh COVID-19 test results or proof of vaccination in hand, to gain access to the fair’s 64 booths. Even New York City’s billionaire former mayor Michael Bloomberg, who pitched in $75 million of his own money to help build The Shed, had to show his credentials to get inside.

The fair itself was predictably muted, both in terms of the work on view and the energy in the aisles. There were about one-third the number of exhibitors that were typically packed into Frieze’s sprawling Randall’s Island tent in years past, and amply spread across three levels of The Shed. Most of the presentations were restrained, aside from ambitious interventions like Marian Goodman’s immersive Annette Messager installation or Sprüth Magers and Galerie Eva Presenhuber’s Gothic mise-en-scène for their joint showcase of Karen Kilimnik paintings and drawings. For obvious reasons, there were none of the grand gestures of Frieze New York’s past, like a sculptural installation in the form of a life-size city bus, a booth inhabited by a live donkey, or another that consisted entirely of a sales pitch for Soylent. The timed entry system also meant there wasn’t the frenetic, buzzing energy of a mega-fair from the pre-pandemic times. 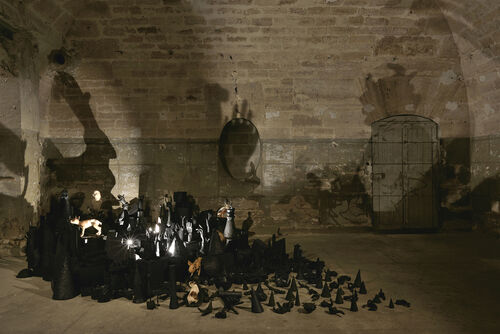 “It’s very different from years past; it’s not everybody lined up at the door, bum-rushing the fair at 11 a.m.,” said Rebecca Ann Siegel, Frieze’s director for the Americas and content. “The trade-off between that high-octane activity in the first hour has been these really fantastic conversations that people have been able to have, as visitors have been spread out throughout the day in a much more measured way.”

Within its constrained format—with fewer galleries offering works to fewer collectors visiting from a more geographically limited range of places—the fair was a success. Galleries reported strong sales, especially in the fair’s first days, aided by a general sense of collective giddiness at actually all being together again in the presence of art. 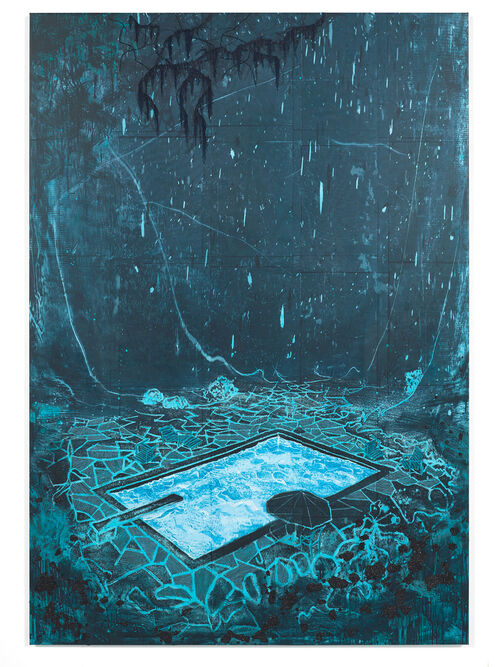 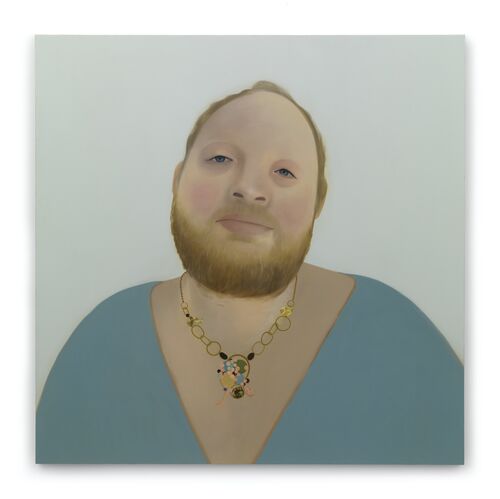 “The inherent pace of the fair has changed, but I would say the greatest shift is that there’s a palpable excitement in the air, which definitely is more pronounced than in prior years,” said Perrotin principal partner and executive director Peggy Leboeuf. “Everyone is so grateful to be back, under the metaphorical art fair tent, and making sales.” Perrotin’s sales included a large glass sculpture by the French artist Jean-Michel Othoniel for $235,000, new paintings by Barry McGee and Daniel Arsham for $140,000 and $100,000, respectively, and a new charcoal composition by Lee Bae for $86,000.

For many dealers I spoke with, the change of pace was welcome, making it easier for them to connect (or reconnect) with collectors face-to-face after more than a year of only being able to do so remotely. 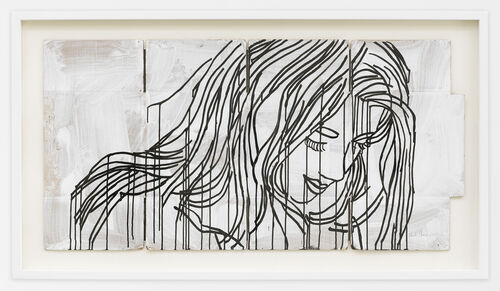 “The structure of the fair this year takes some of the initial pressures off—we know that we will see our clients throughout the entire run of the fair, not just on the first day,” said gallerist Tina Kim. “Everyone is just so happy to be here and to be able to engage with art again, and that is reflected in the sales.” Her namesake gallery’s sales bore this out, with collectors snapping up two large paintings by Ha Chong-hyun and a work by Park Seo-bo, all in the range of $200,000 to $300,000, as well as three pieces by Suki Seokyeong Kang in the range of $25,000 to $50,000 each, and a Ghada Amer drawing for $45,000.

The fair’s solo booths, which accounted for many of its standout presentations, seemed to focus collectors’ attention and drive a significant share of sales. London’s Stephen Friedman Gallery, which opened a pop-up space nearby in Chelsea for the occasion, devoted its Frieze booth to portrait paintings by the British artist Sarah Ball, who joined the gallery’s roster in November. By the end of the fair’s first day, they’d all been sold for prices ranging from £15,000 to £35,000 (nearly $21,000 to over $48,000). 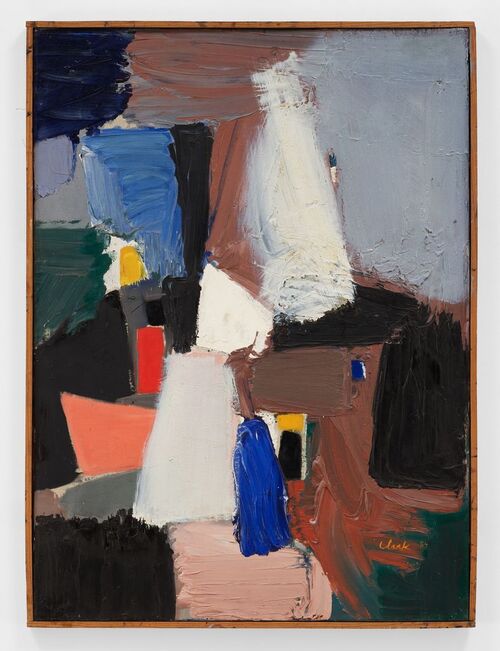 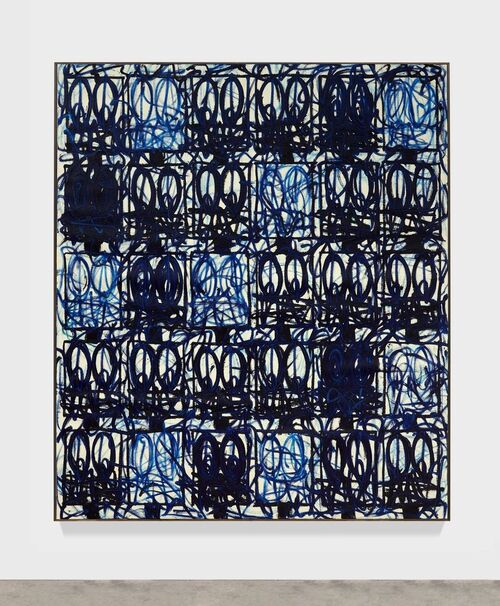 “The confidence amongst collectors at Frieze New York is very encouraging, particularly during this difficult time,” said Mira Dimitrova, the gallery’s director of sales. “We have far more demand than we can satisfy at this point so will be continuing many of the conversations ahead of her first solo show at the gallery next year.”

The most notable sales made at the fair included the following: 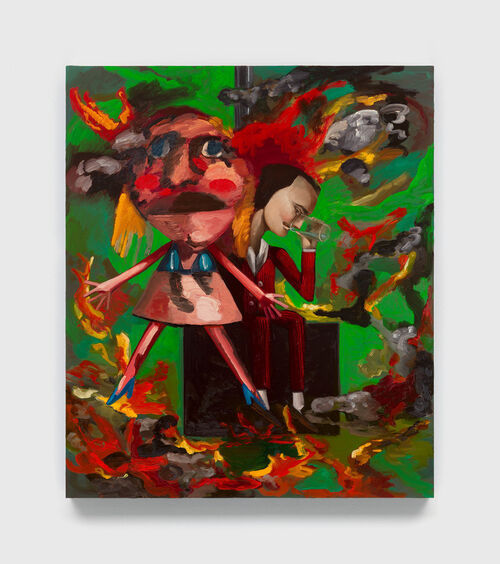 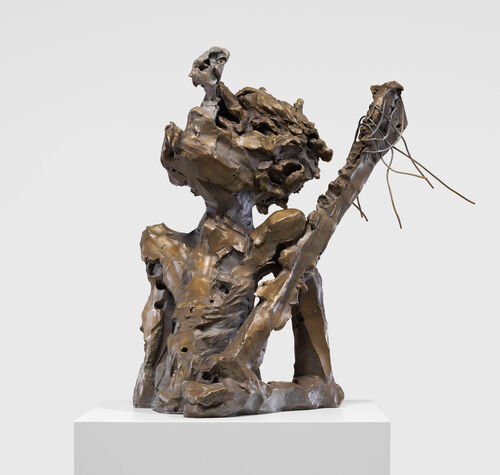 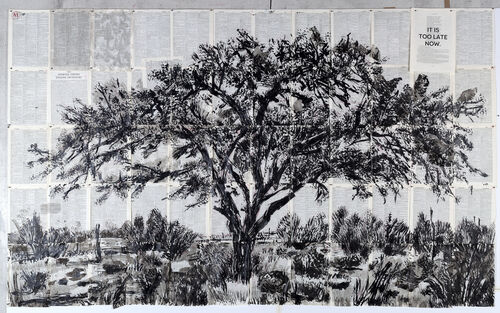 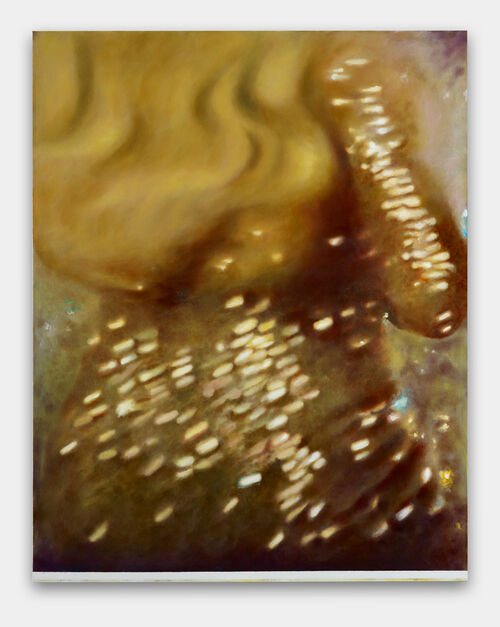 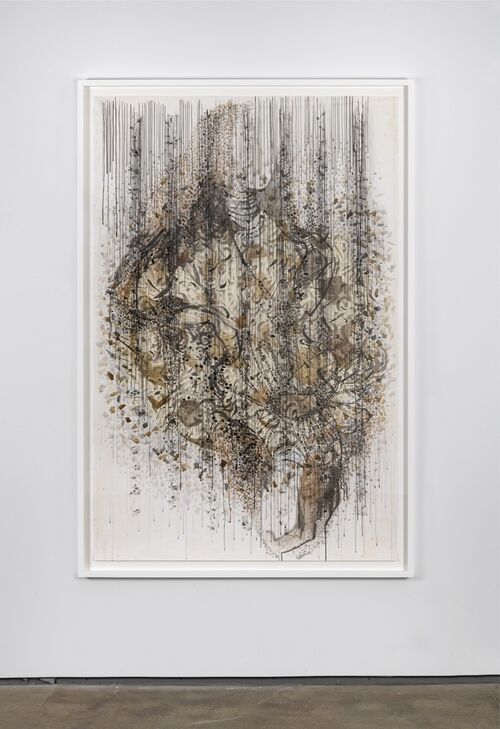 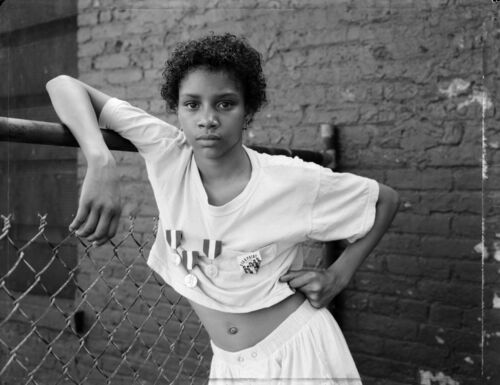 Another distinguishing feature of the fair was its reliance on a strong turnout from local collectors. Whereas past editions of Frieze New York—and the bevy of fairs typically timed to coincide with it like 1-54 and TEFAF New York—could reliably draw collectors from around the globe, travel restrictions and health concerns made for a distinctly regional turnout. 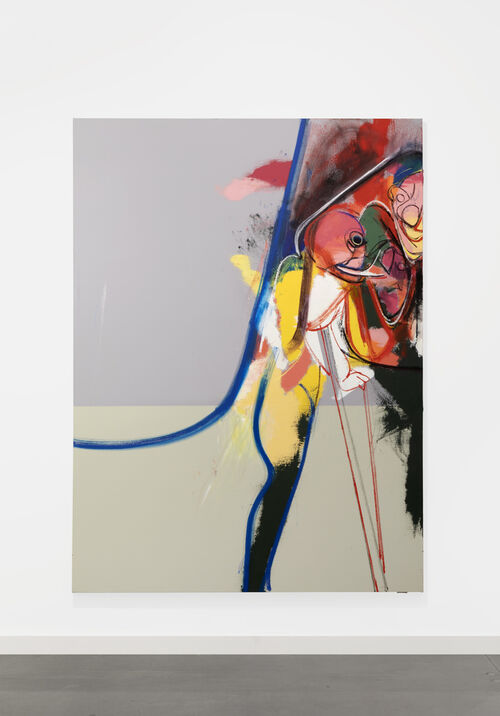 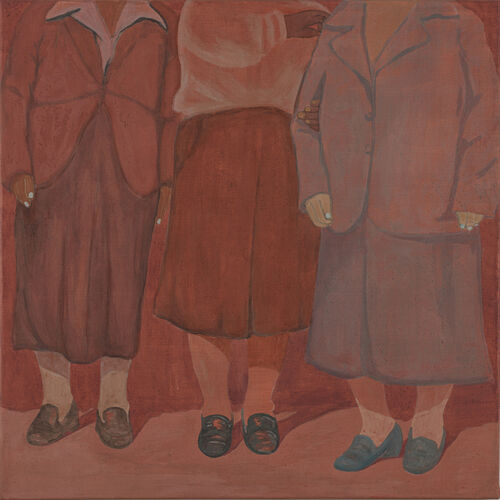 Beyond the contingent of committed New Yorkers, gallerists said the collectors making the trek to The Shed tended to be coming from California, Texas, the Midwest, and Florida—including Miami’s Don and Mera Rubell, who plied the aisles on opening day. “I was expecting a tristate-area audience and was happily surprised to learn that many of my clients were planning on traveling for the fair,” said Jessica Kreps, a partner at Lehmann Maupin. “During the week, we were able to meet with clients from Los Angeles, Dallas, Chicago, San Francisco, and Miami. We even had a client travel from Jakarta!”

The gallery’s intrepid patrons came ready to buy. Lehmann Maupin reported selling three paintings by Dominic Chambers for prices between $35,000 and $40,000, including one to a collector in Florida and another to a Canadian collector; two new works by Gilbert & George priced at £60,000 (nearly $84,000) apiece, one of them to a Boston-based collector; a large McArthur Binion work, Modern:Ancient:Brown (2020), in the range of of $160,000 to $200,000, to a collector based in Palm Beach (where the gallery has a seasonal outpost); and the booth’s centerpiece, The Suspect (2021), a six-panel painted folding screen by Hernan Bas, to a European collector for a price in the range of $350,000 to $400,000. 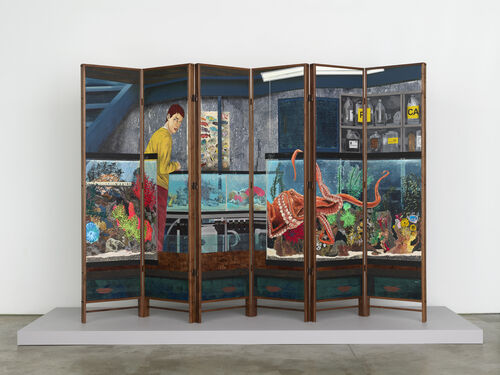 “The ongoing travel restrictions are real, and being able to reach audiences digitally, who are abroad, as well as our local audience at The Shed, has been really wonderful,” said Siegel, noting that the fair’s offerings extend beyond the 64 physical booths at Hudson Yards to more than 160 digital presentations on Frieze’s online viewing room platform. “For galleries, this moment has been as much of a return as we can possibly have at this point.” 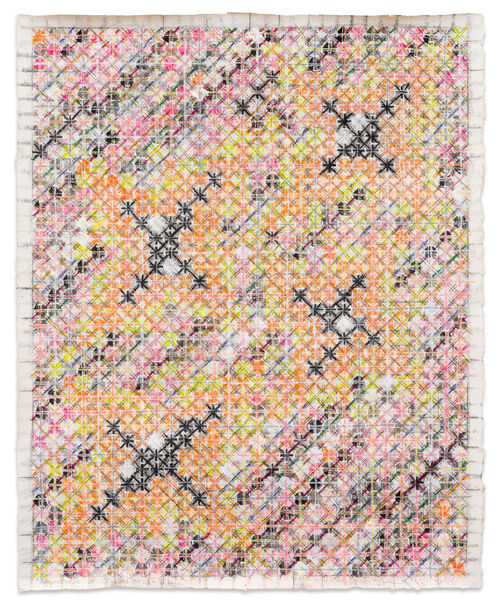 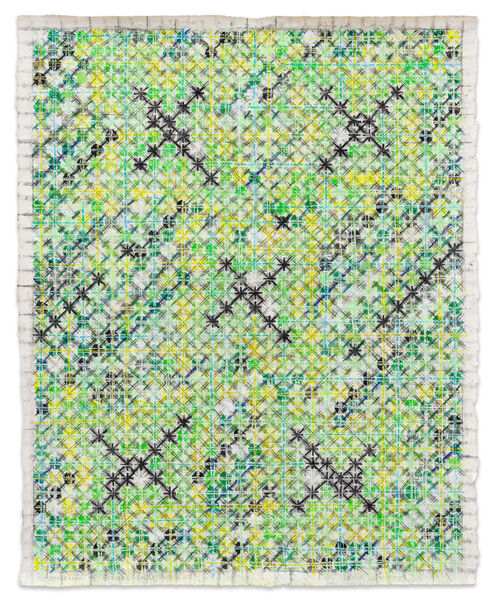 New York’s first in-person COVID-19-era art fair is in the books, and it made clear that collectors’ appetites weren’t diminished by the pandemic. The next major measure of the art market’s resurgence begins tomorrow, when Christie’s and Sotheby’s hold their marquee spring auctions in New York, which are expected to bring in upwards of $1 billion. Ten days later, Art Basel returns to Hong Kong, arguably the most resilient art market capital over the past year—yet another signal that the art world may be poised to return stronger than it was at the beginning of 2020. 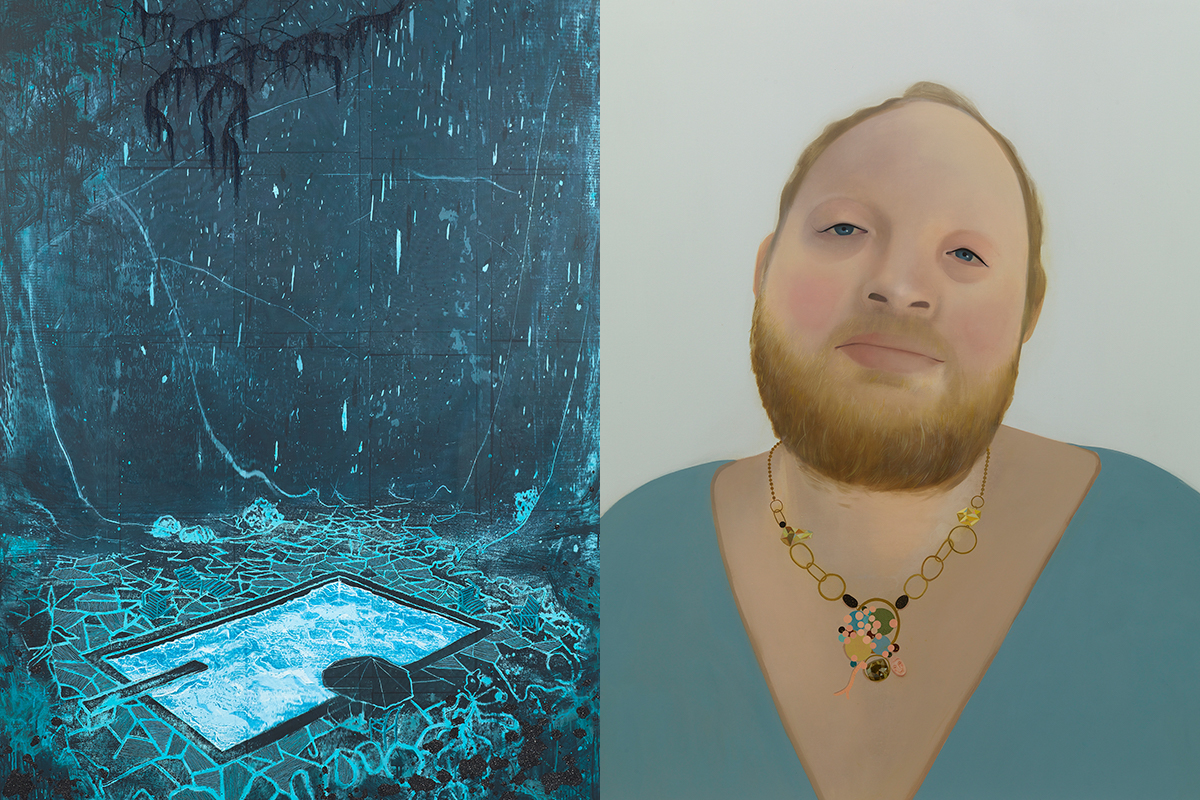 PrevPreviousElena Raceala
Next“One Day with Salvador Dalí”: A Surreal Photo Shoot of Salvador Dalì in His Seaside Villa, 1955Next
On Key