The Challenge and Allure of Portraying Sex in Art Today 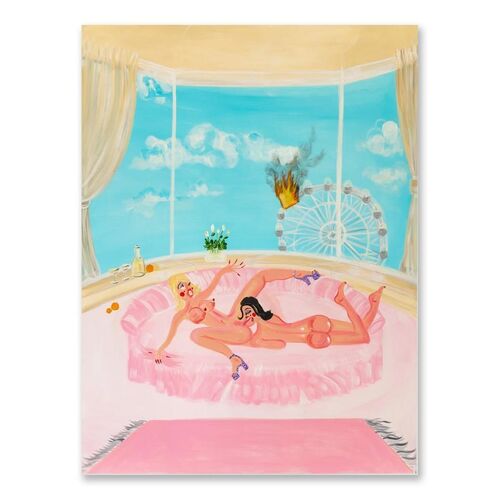 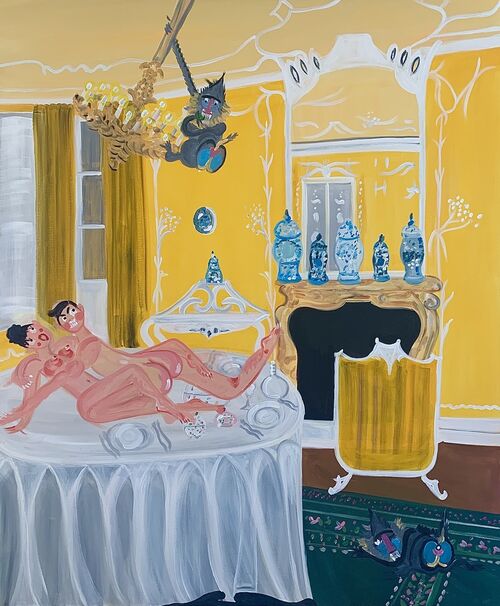 Humans Like Being a Little Scared but They Don?t Want to be Disturbed, 2020 .
Oh de Laval
Unit London

Sex is one of the oldest subjects in the history of art, but never has it looked the way it does in 2021. Depictions of sex and art have always been entangled—Picasso even went as far to suggest that the two are inseparable. But in an age when romantic liaisons are often mediated through screens and an embrace can potentially be fatal, sex has become something else for a new generation.

Portrayals of sex in art aren’t just about pleasure and arousal—though, of course, that’s still part of the fun. Such a provocative subject, and one that is so highly subjective, isn’t as easy as it might seem at first glance. Steeped in so much history, prejudice, and politics, sex might actually be one of the most difficult subjects to deal with in art today. 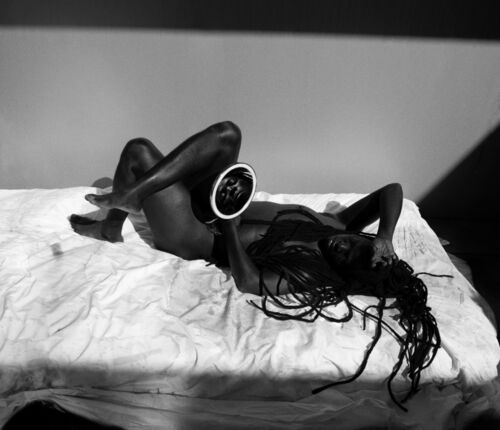 For centuries, queer artists and women artists have been using shock tactics when it comes to sex. In the past few decades, artists like Betty Tompkins, Marilyn Minter, Zanele Muholi, Rotimi Fani-Kayode, and Joan Semmel, among many others, have pioneered this space in contemporary art by making work that didn’t apologize for its directness. For artists working today, building upon the ideas of their predecessors, sex has become a rich, complex subject. It’s often a means through which to interrogate the way we look at and treat bodies, particularly those that have been subjugated and othered by the male gaze. Portraying sex is ultimately about freedom—something that has become even more relevant given the pandemic and social upheaval of the past year. 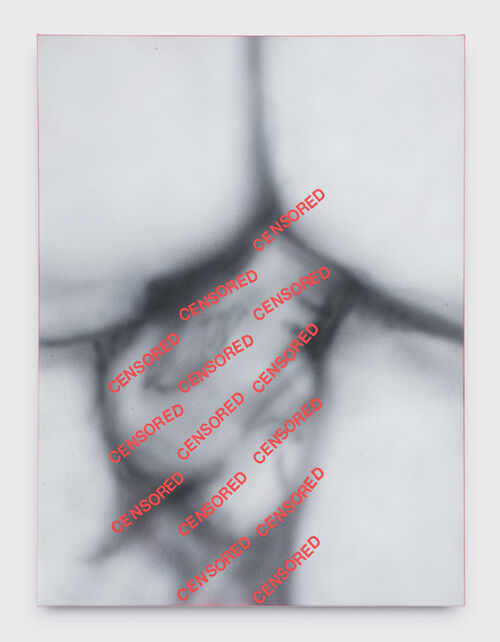 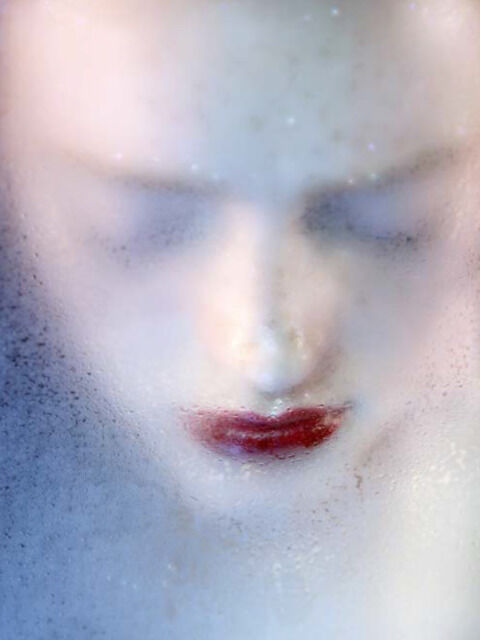 “Sexual imagery is very much at the core of my work,” said New York–based painter Doron Langberg, a graduate of Yale’s MFA program who recently joined Victoria Miro’s roster. Langberg recalled that he started working with explicit subject matter as a junior in college. “I made small graphite drawings from sex videos I’d make with guys I was with. At the time, I wasn’t really thinking about why I was doing it. For me, it was a formal exploration and an opportunity to work with the body, which I loved,” he said. “In retrospect, I think that I wasn’t ready to see myself as a ‘queer artist’ because it felt limiting. But slowly, I came to realize that what was limiting is not being queer, but rather the social perception of queerness, and working with explicit imagery was my way of communicating queerness as I experience it, and not as it’s been told to me.”

There’s a touch of Joan Semmel in Langberg’s delicate way of capturing the movement of the flesh, whether it’s a couple in the throes of passion, a lover sleeping nude, or a friend sitting in a chair. Each one of these images is intimate and vulnerable in their own way. 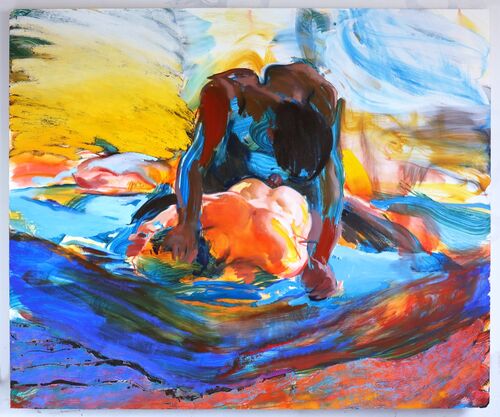 “Queer sexuality has been so sensationalized that even a mild expression of it, like holding hands in the street, is highly charged and could have repercussions,” Langberg noted. “Thinking of that as a context, depicting queer relationships in a casual way feels radical still.”

For many artists, the full-frontal view of sex is a way of insisting on their right to be desiring spectators, to normalize their desires by not shying away.

“As blasé as the art world is about sexuality and explicit work, that doesn’t reflect how the outside world relates to these issues,” Langberg said. “Even posting my work on Instagram is touch and go. But the response explicit imagery elicits, especially queer explicit imagery, is in the DNA of my practice. I don’t see it as a problem to overcome, rather as part of the politics of my work.” 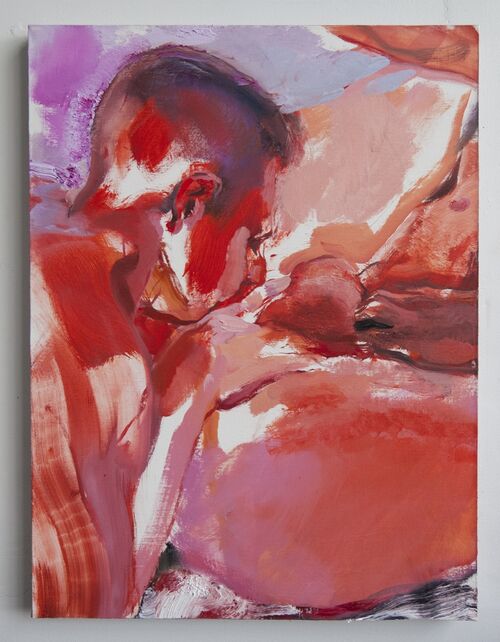 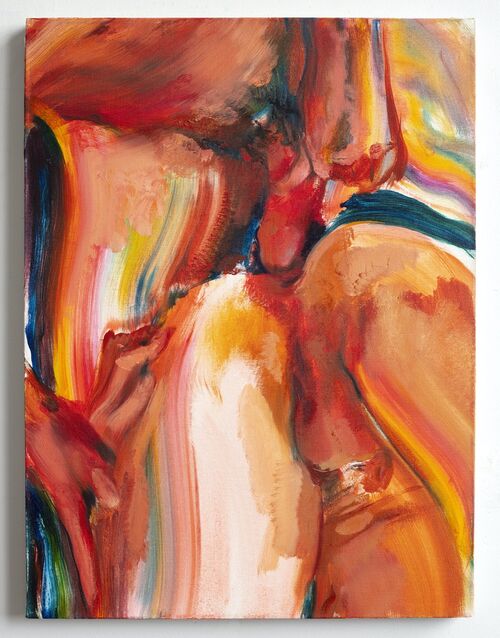 Langberg himself has sat for the painter Jenna Gribbon, who is currently working on her next exhibition, due to open in London at Sim Smith in the spring. (She also recently had solo shows with GNYP Gallery and The Journal Gallery, as well as group shows with Miles McEnery Gallery and Taymour Grahne Projects.) A large part of her portrait work, too, has been focused on the people closest to her, especially her partner who features in paintings regularly. “I’m interested in what it means to see and be seen in a time where there is more imagery of both than ever before,” Gribbon said. “Desire isn’t the only aspect of looking that I deal with, but it does factor in frequently when I paint my partner.”

Gribbon’s partner is comfortable being her muse—she’s a professional performer and musician—but in painting her, Gribbon also turns her into an object for others to look at. “One of the things that interests me is the contrast between the big, zoomed out experience of an audience seeing and interacting with her, and a kind of myopic focus in our intimate moments,” she said. 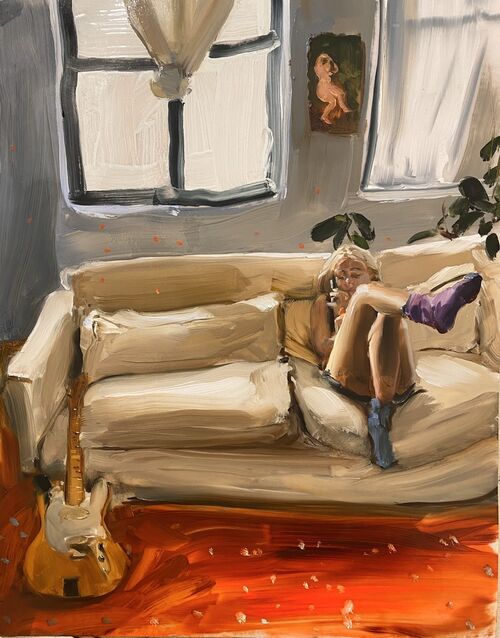 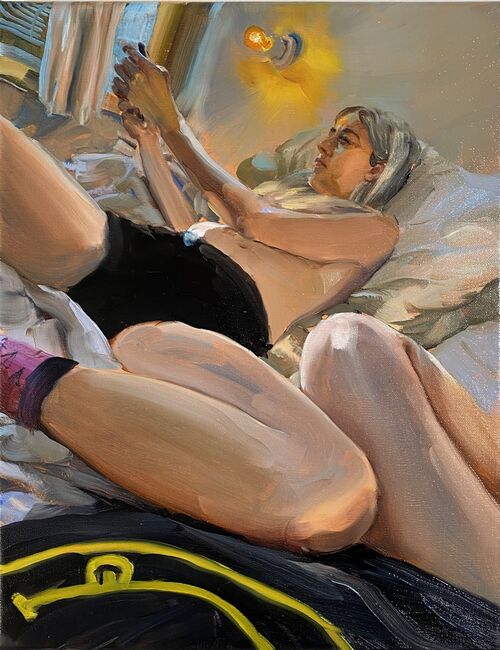 This intense, intimate lover’s gaze is an important tactic for Gribbon “to jar people out of what they think they already know about consuming images of naked women, hence the fluorescent nipples,” she said. “If you can get someone into a position of self-consciousness, it’s a fruitful starting place.”

One of Gribbon’s recent oil paintings, Objectified in Boxers (2020), features her partner, hair loose, hands in pockets, eyes cast down and smiling, wearing nothing but a pair of boxer shorts. “You can’t completely avoid objectification when depicting a naked body, so I think it’s best to acknowledge that and move on,” Gribbon explained. “Treating objectification as some kind of deal-breaker negates the actual complexity of the subject and blocks some really interesting paths of exploration. One of those paths is the depiction of desire for a woman’s body from the perspective of another woman. It’s something we’ve still seen very little of culturally. Narratives in this realm that we do encounter are usually of the manufactured pornographic variety, or that of ‘they were basically just really good friends who were affectionate.’” 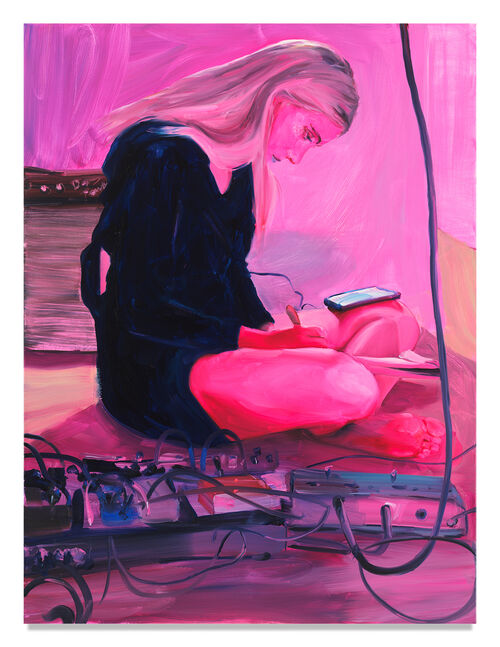 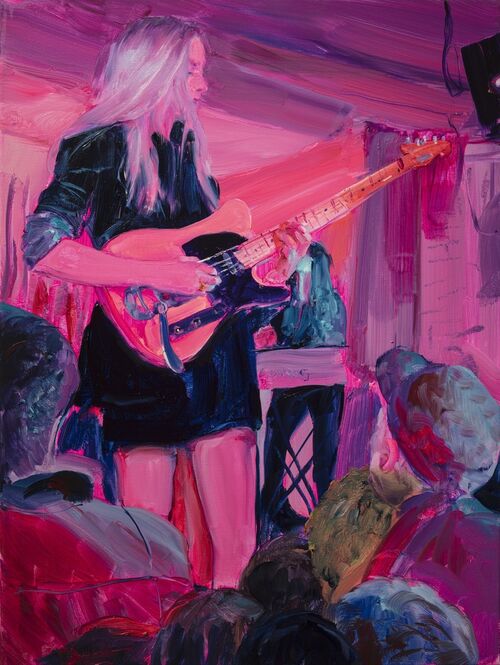 My girlfriend in a short skirt, a row of men between us, 2020.
Jenna Gribbon
GNYP Gallery

Gribbon added, “These preferred modes of depiction are so ingrained that it can be hard to make something that deals in a woman’s desire for a woman that doesn’t get viewed through one of those two lenses.”

Gribbon’s resolve as a painter has been to acknowledge that specificity of experience, the desire she feels in her own relationship, and to make the viewer aware of her own complicity and involvement in looking: whether it’s through perspective or by introducing her own body into the work, too. “That said, I have also thought about about queer eroticism depicted by male artists and been jealous at times,” she said. “I wondered, ‘Why can’t we have that? Where are our Marsden Hartley beefcakes?’” 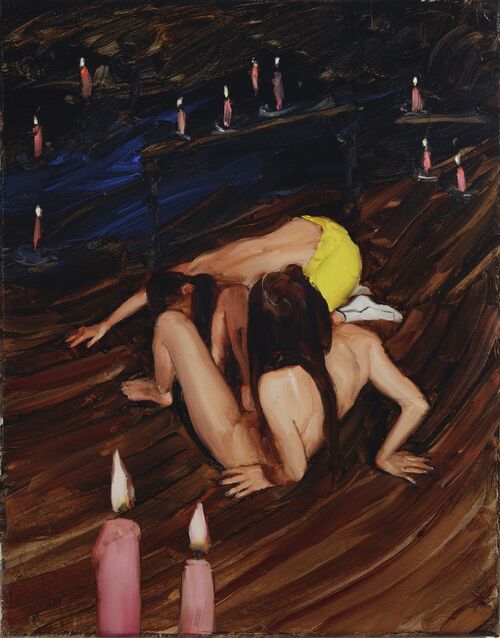 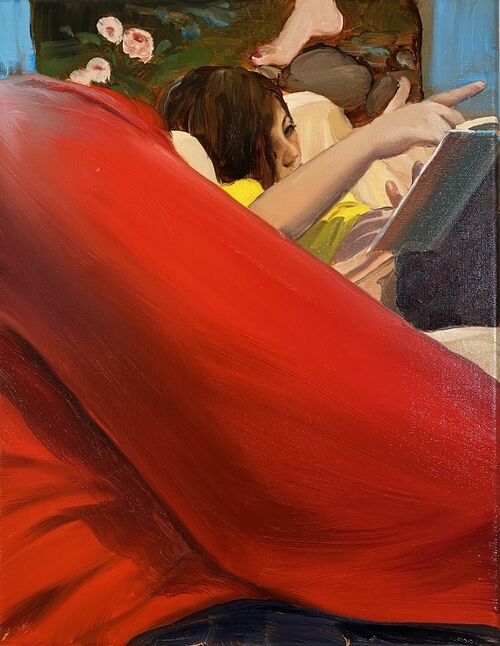 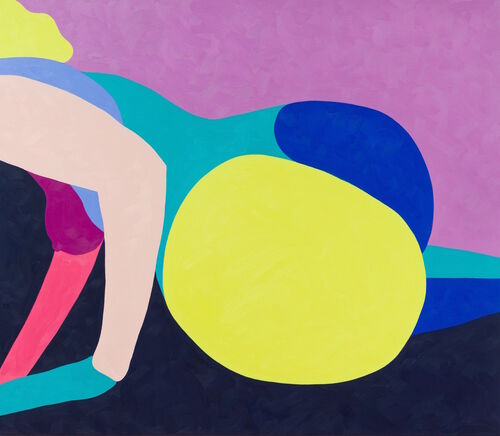 And the Moon of my Heart is Shining Forth, 2020.
Helen Beard
Alex Daniels – Reflex Amsterdam 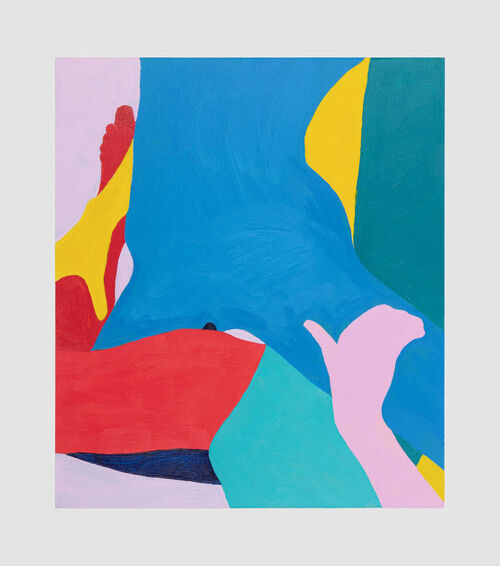 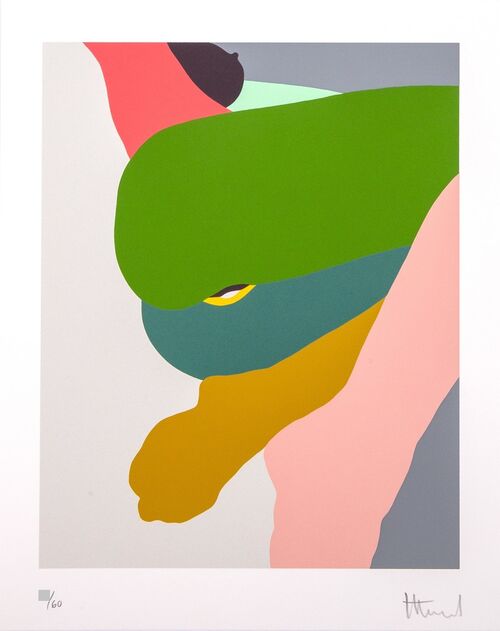 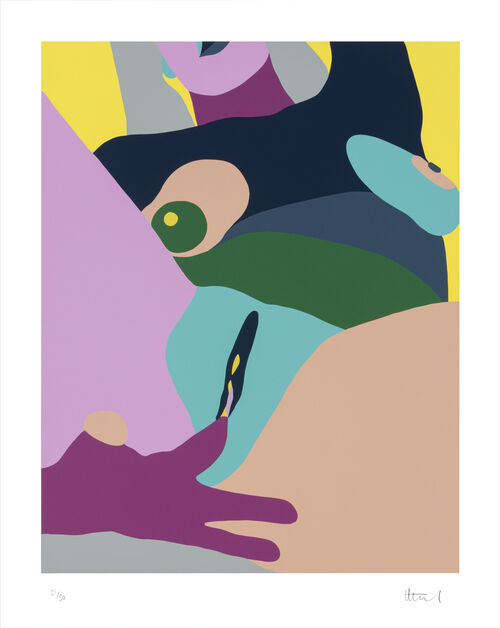 The Song of Self, 2019.
Helen Beard
Subliminal Projects

Alfonseca, who is showing new work with Gallery 1957 this year, focuses on the real lives of people living in her community, as she sees them. She creates striking images that resonate on a fundamental human level, whether it’s a shared kiss or a couple canoodling, eyes closed, serene, together in bed. There is nothing sensationalized about her depictions, but that doesn’t take away from their inherent eroticism, and she uses an attention-grabbing palette of punchy pinks, purples, and reds, reminiscent of romance. 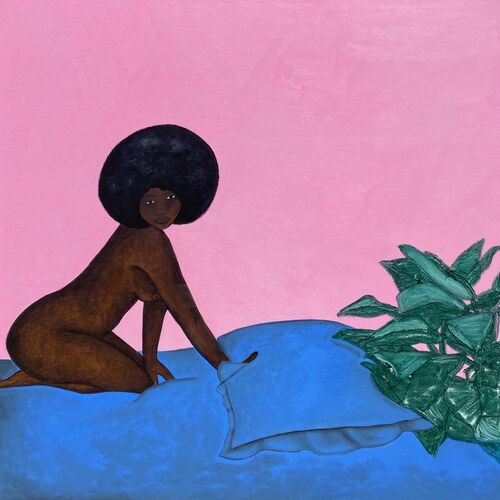 “The dynamic of my work focuses on normalizing the Black body when one is expressing their sexuality or sharing intimate moments with a loved one regardless of their sexuality,” Alfonseca said. “For far too long, the Black body has been fetishized when it comes to sexuality and intimacy throughout art and culture. My goal is to change that through my practice.” 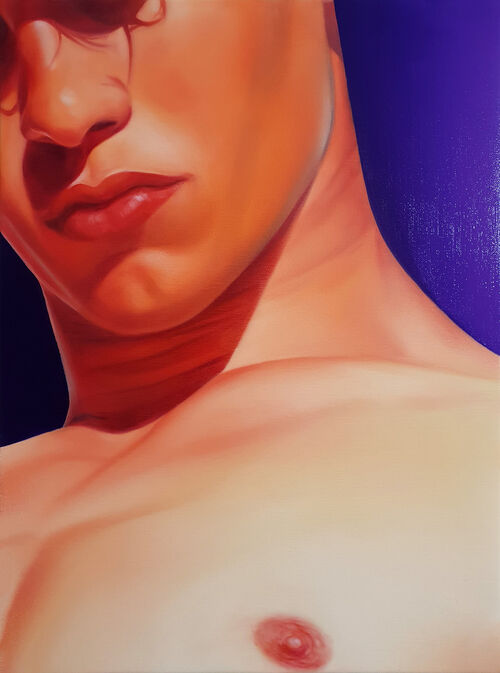 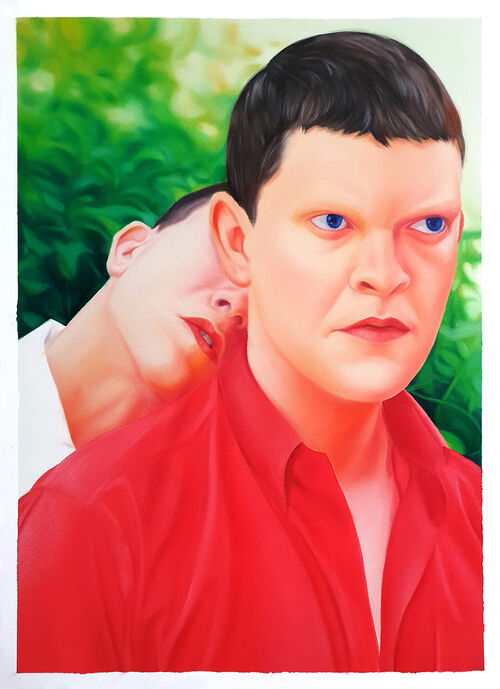 In fact, the avatar-like figures in Hartmann’s portraits rarely display any mutual attraction or affection; they seem to float in space, devoid of desire—in the artist’s words, “a dysfunctional romance between alienated figures.”

“I always depict the figures in my paintings in relationship to others,” Hartmann explained. Even when there is only one figure in painting, he noted that “you can sense the absence of the ‘other,’” as the subject gazes or points towards it beyond the frame. “I am particularly interested in the ambiguity of these relationships, the tension that oscillates between romance and rejection,” he added. 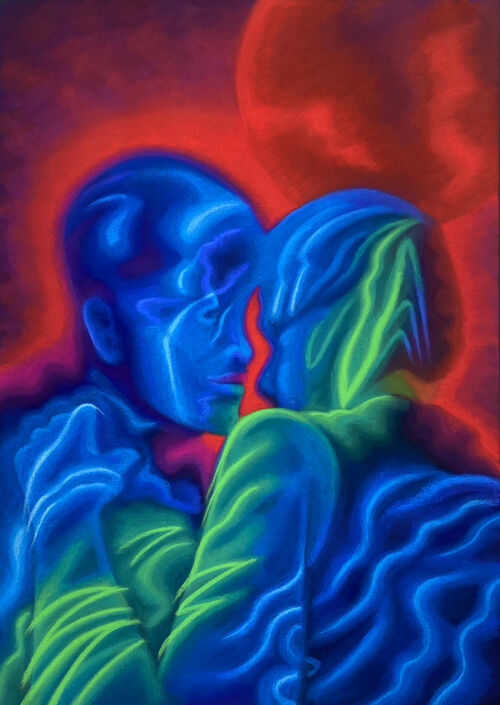 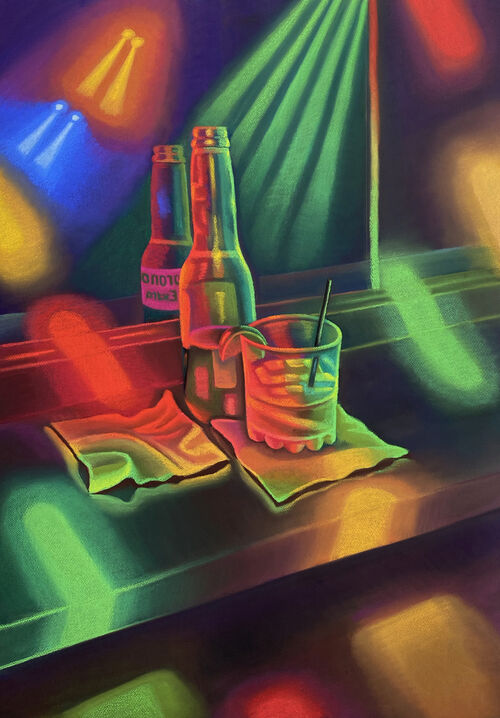 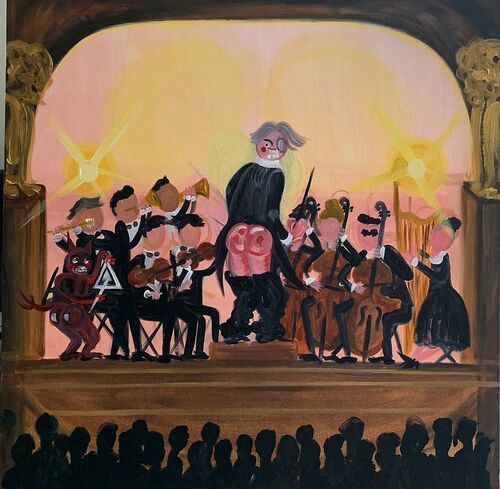 “The eroticism in my paintings is as much about sexual desire as lust, wrath, violence, despair, and happiness,” Oh de Laval explained. “These emotions each play an expressive role in that precise moment when we are caught between the civilized person we have grown to become and that wild part of our nature that we forget we are. It’s no longer our nature to behave wild in our civilized world because technology has made it all too easy to tame. 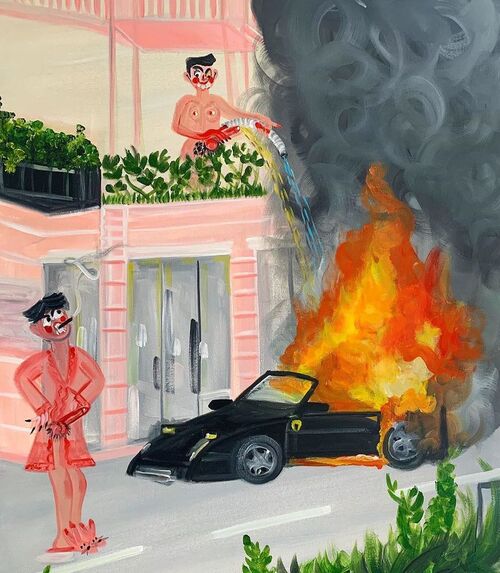 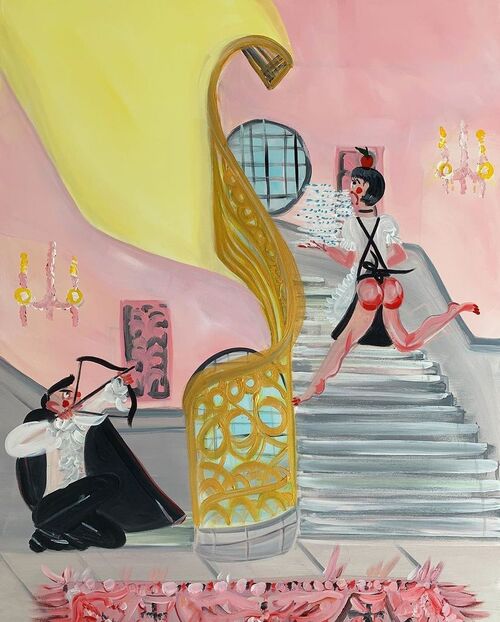 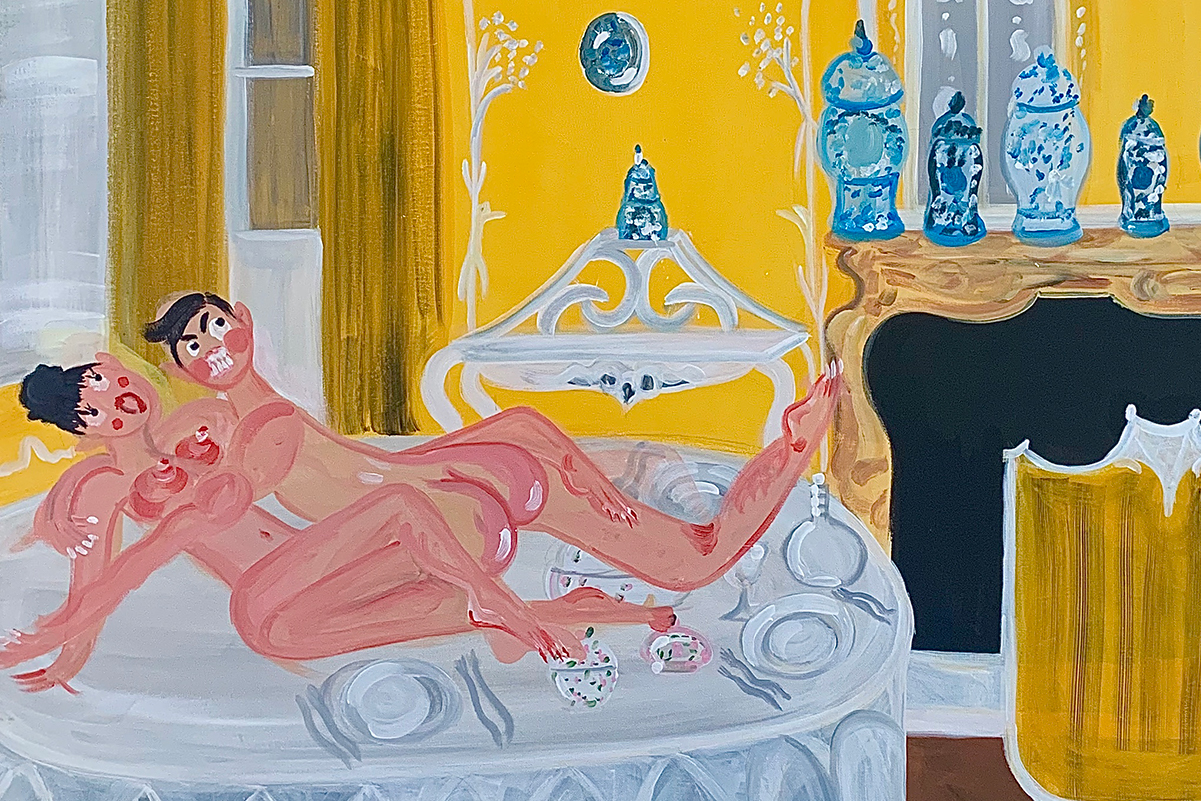