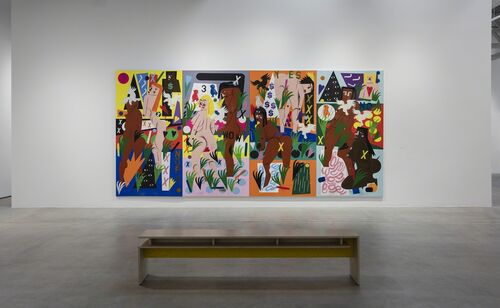 As far as art market success stories go, Nina Chanel Abney’s strong and steady ascent is a remarkable one; few artists can boast the kind of interest that Abney’s work inspired from the get-go. Beloved by museums, curators, collectors, and fellow artists alike, Abney’s idiosyncratic and dynamic visual style, paired with her willingness and ability to deftly tackle difficult topics, has quickly made the Chicago-born artist a leading figure in contemporary art. Ambitious in scale, her geometric, almost Cubist compositions and flat application of bold colors create intensely rhythmic works that explore the Black experience.

“I think she’s very brave; some of the themes she touches on are quite tough but are very of the times and necessary,” said Marina Ruiz Colomer, a contemporary art specialist and head of day sales at Sotheby’s. “To do so in such an original and unique way is what sets her apart and what makes collectors, auction houses, and everyone else in the art world so excited about her.”

Demand for Abney’s work was apparent starting with a groundbreaking painting at her MFA thesis show at Parsons. Titled Class of 2007 (2007), the 15-foot-wide piece depicts Abney as a white prison guard and her white classmates as Black prison inmates, contrasting the institution’s lack of diversity (Abney was the only Black person in her class) with the disproportionate number of Black men incarcerated in the United States.

Graduating from Class of 2007 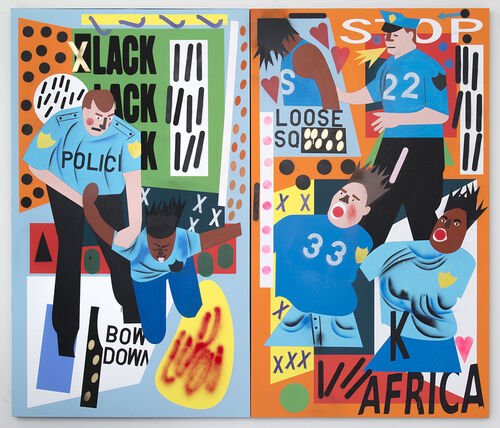 What, 2015.
Nina Chanel Abney
Modern Art Museum of Fort Worth

The work struck a chord with Susie Kravets and Marc Wehby, who soon after offered Abney her first gallery representation and in 2008 held a sold-out debut gallery show of her work at their Chelsea space, Kravets Wehby. Later that year, Class of 2007 was acquired by the tastemaking Miami collectors Don and Mera Rubell and included in the Rubell Museum’s traveling exhibition “30 Americans.” In addition to showcasing her work within one of the most prestigious private collections of contemporary art in the country, the exhibition also placed Abney’s painting in direct conversation with works by other African American artists, including Kara Walker, Jean-Michel Basquiat, Wangechi Mutu, and Mickalene Thomas.

Though not formally consistent with her better-known work, Class of 2007 does demonstrate the kind of thematic irreverence that became a hallmark of Abney’s oeuvre. By 2008, she was honing in on what has become her signature flattened and fractured style. 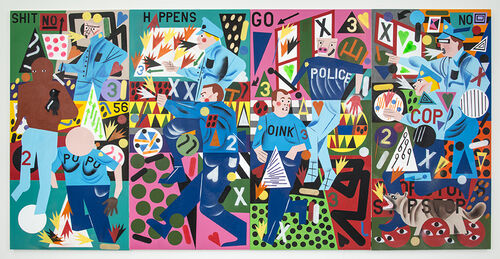 Why, 2015.
Nina Chanel Abney
Modern Art Museum of Fort Worth

“What’s wonderful about Nina’s work is that she tackles such contemporary and salient themes in a style that is very much her own and that appeals to large swaths of people,” said her gallerist, Jack Shainman. Abney held her second solo show with Shainman late last year, focusing on scenes of Black leisure and joy. She signed with the gallery in 2016; the following year, she received her first solo museum exhibition, a 10-year survey organized by the Nasher Museum of Art at North Carolina’s Duke University.

That exhibition, which ultimately traveled to museums in three more cities across the U.S., also set the stage for Abney’s entrée into the secondary market. In 2018, her 2012 canvas Country Ken appeared at a Christie’s sale with a high estimate of $7,000; the work ended up selling for a jaw-dropping $47,500.

Following the tremendous success of her auction debut, works by Abney have continued to hit the ball out of the park. To date, Sotheby’s holds the auction record for a work by Abney with Paradise Found (2009), a surreal and unsettling canvas featuring bathers in a hot tub. Estimated at £70,000 ($88,800), the painting sold for over triple that amount, for £225,000 ($285,400), in 2019. “From the very first time we put her work into one of our sales, we saw that collectors were excited about her,” said Ruiz Colomer. 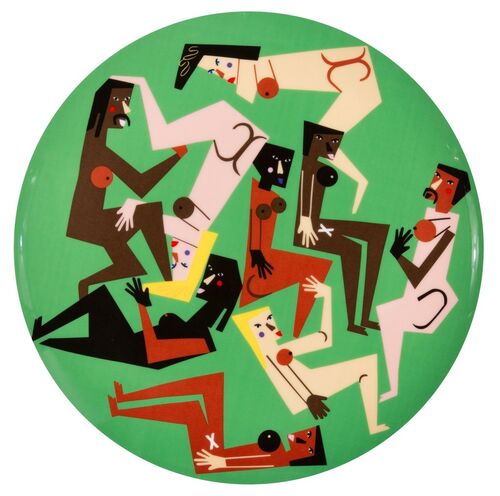 Abney’s work has also continued to find placement in high-profile art collections. In 2018, the Studio Museum in Harlem was bequeathed a 2012 work by Abney from the late collector Peggy Cooper Cafritz. Hip hop legend Q-Tip and NBA player Moe Harkless are also collectors of Abney’s work.

This sustained interest has driven the growing market for Abney’s paintings, which now consistently achieve prices in the six-figure range at auction. Her primary market has followed this rapid trend upward. At the 2018 edition of Art Basel in Miami Beach, Jack Shainman sold Abney’s large painting Q&A (2018) for $72,000. At the following year’s edition of Art Basel in Basel, the gallery sold the enormous diptych Junk Mail Scribble (2019) for $185,000.

In addition to her larger unique works, Abney’s prints and multiples are also hugely popular. “Nina is so committed to pacing herself when it comes to making work, but equally committed to thinking about access and how to widen her audience at different price points,” said Shainman. “Nina has always seen her print practice to be very much in line with her painting practice, but also explores ways of opening areas of accessibility with her multiples and product collaborations. That being said, the demand is incredibly strong all around.” 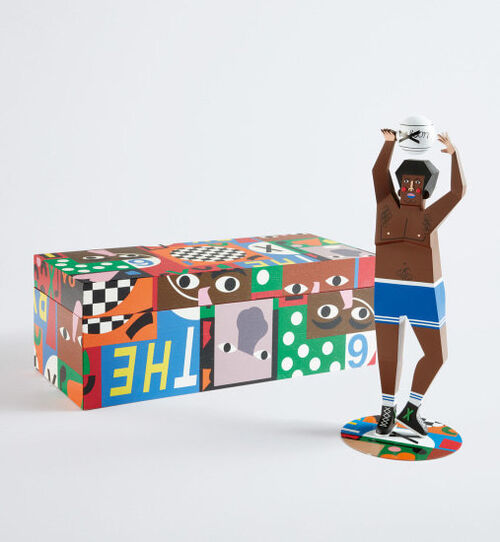 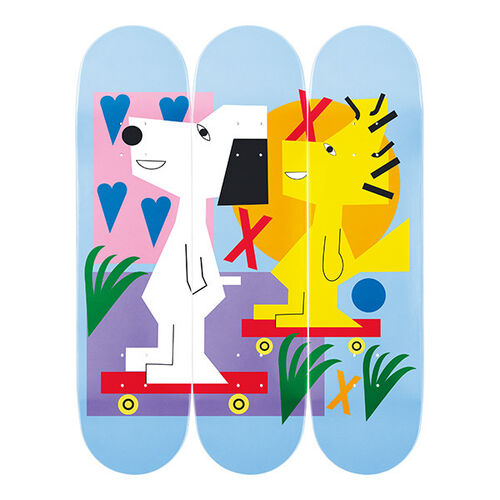 This past January, one of Abney’s vinyl figurines sold for $2,125 at Heritage Auctions, well over double its high estimate of $800. Recent brand collaborations, like a deck of Uno cards she produced with toymaker Mattel, sold out swiftly; the Uno cards now sell on streetwear marketplaces for over three times their original $20 price tag. Meanwhile, editions of a trio of skate decks done in collaboration with the art and skate nonprofit SkateRoom have consistently fetched around $1,300 for the full set.

Lindsay Griffith, head of prints and multiples at Christie’s in New York, explained that while secondary-market interest in Abney’s print market is high, it is still an emerging market. “I think it is more the case that because most of her work is still so recently published, the prints are still with their original owners,” she said. “As very few editioned works have thus far come on the secondary market at auction, in our experience interest has always been strong when there are lots in the sale.” 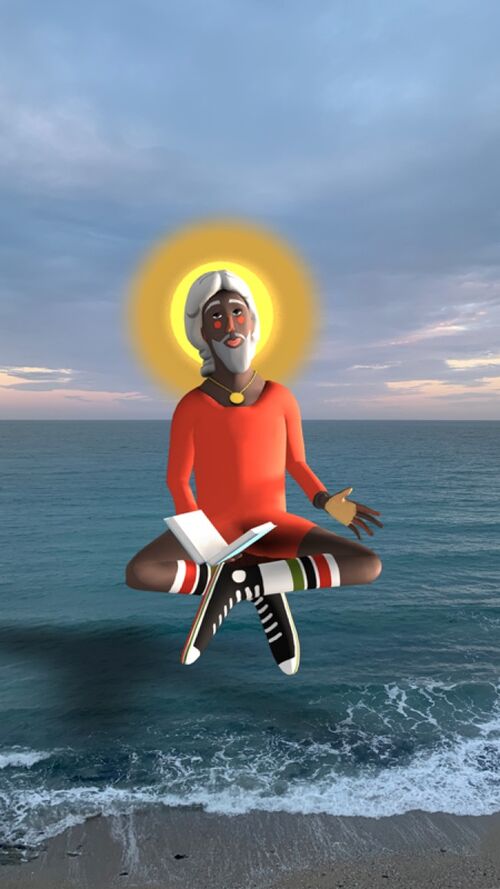 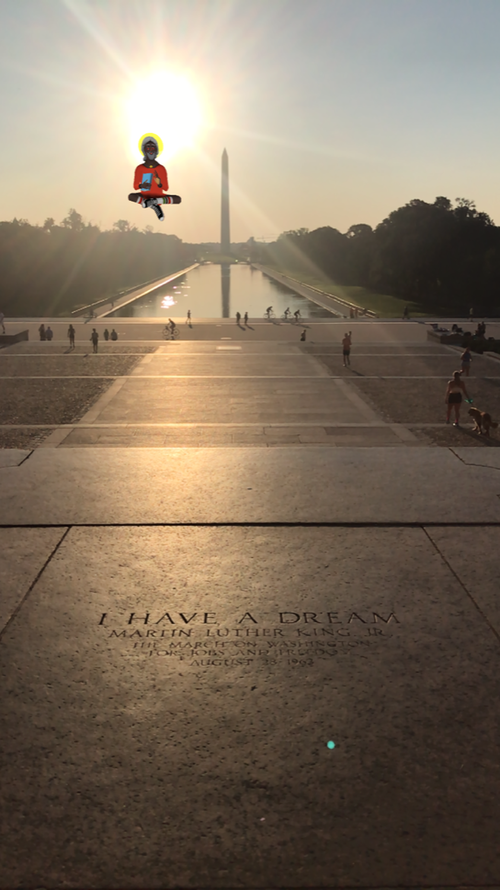 Portrait of Nina Chanel Abney with Imaginary Friend, 2020. Photo by Khari Ricks. Courtesy of the artist and Acute Art.

While much of the subject matter in Abney’s work is ostensibly U.S.-oriented, Ruiz Colomer noted that this has not limited her audience in the least. “Her appeal is quite broad,” said Ruiz Colomer. “We’ve seen bidders and buyers come in from all around the world—we have seen bidders from Asia, Europe, and the U.S. Her work is done in a very specific style and her themes are, in my opinion, very American and from her own experience. But she executes them in such a universal way, which is why I think she appeals to different types of collectors.”

Shainman concurred, stating that the universality of the themes in her work “has translated to interest from an incredibly diverse range of established and emerging collectors.”

This past year, Abney has proven that not even a global pandemic can slow down her ever-broadening horizons. Last summer, she launched her first-ever augmented reality artwork, Imaginary Friend (2020), with Acute Art, which tells the story of a sage-like figure who offers words of encouragement. “Sometimes we believe nothing good can ever happen to us, so it don’t,” says the sage. 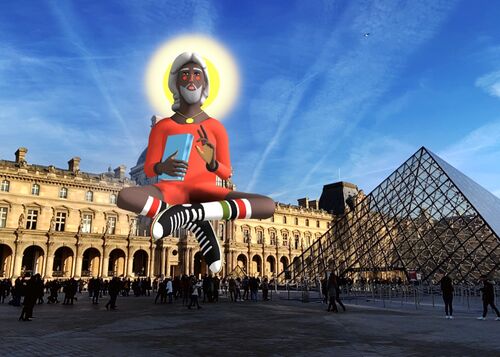 “Nina’s work with AR really came from her thinking about how we can all experience art while we are so isolated from one another, as well as her wanting to use humor as a tool to help process so much grief and anxiety,” said Shainman. “She created Imaginary Friend as a sort of modern-day sage to help mitigate the uncertainty we’re living with, intentionally accessible for free and around the world.”

This foray into augmented reality in addition to her continued work as a prolific muralist and brand collaborator, as well as her upcoming museum projects, are further testaments to Abney’s commitment to making her art accessible to all—even as her market continues its astronomical ascent. 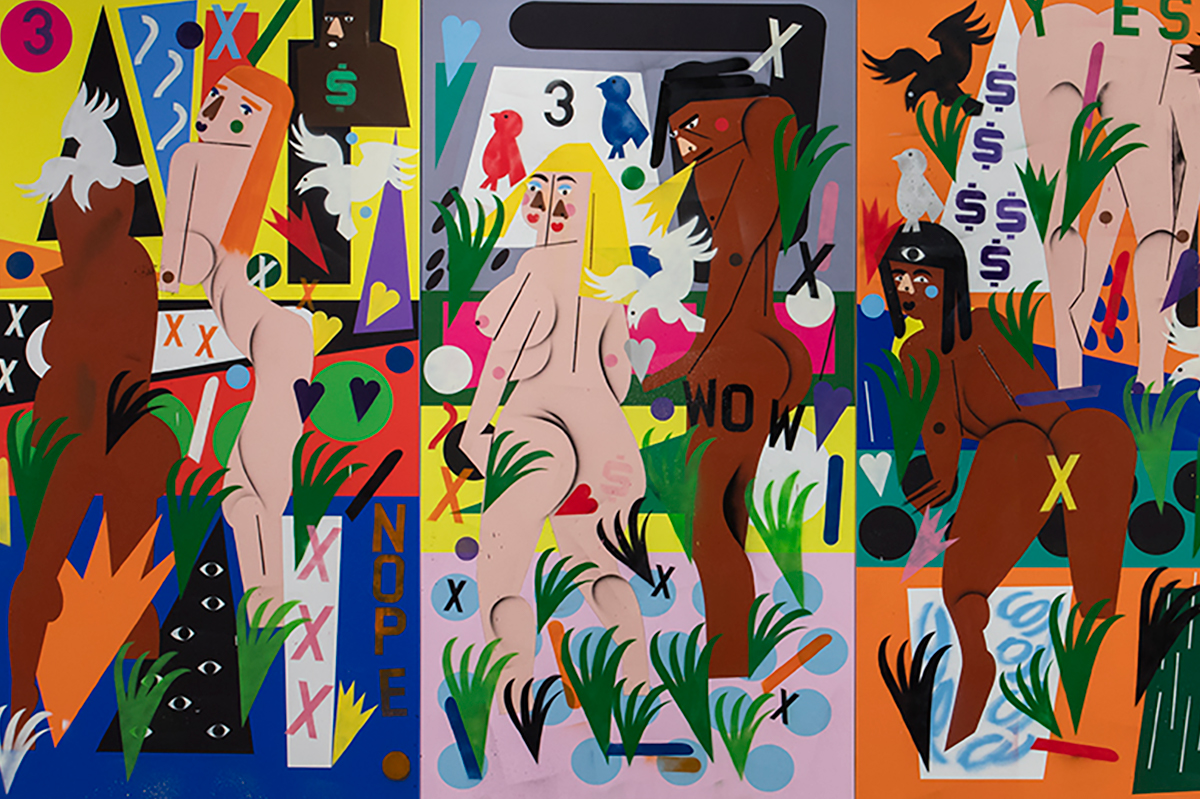