Love from a Stone: How Isamu Noguchi Became a Sculptor and Visionary for the Ages

Isamu Noguchi was a storied sculptor and, over the course of an eclectic career from the 1920s until his death in 1988, so much more. His ethereal workings of chopped and finessed stone were accompanied by monumental treatments of many other sculptural materials. Then he worked as a sharp-eyed designer of iconic furniture as well as unassuming industrial products and fantastical playgrounds that any child would be lucky to indulge. And, thinking ahead, he also shored up his legacy by creating museums for his own work in New York and Japan that count as destinations for many an art world jet-setter (and connoisseurs closer to home).

On the occasion of the artist’s birthdate on November 17, 1904, here’s a look at some highlights from Noguchi’s distinguished time on Earth.

He studied with Brancusi.
Few sculptors are as admired among their peers as Constantin Brancusi, and Noguchi not only admired him but spent formative time working under his tutelage in Paris. On a stop in London while making his way from New York to Paris in 1927, Noguchi met painter Nina Hamnett, a close friend of Brancusi’s, and arranged an introduction that led to a job as the great sculptor’s studio assistant. In Hayden Herrera’s 2015 biography Listening to Stone: The Art and Life of Isamu Noguchi, painter Andrée Ruellen, a companion of Noguchi’s at the time, recalled, “He seemed to be attached to everything about Brancusi. He even wore Romanian wooden shoes like Brancusi did. And he talked over and over about how Brancusi lived for nothing but work. I can’t say that in our circle Isamu attracted special attention for his talent. But I thought that he had a wonderful sense of beauty.” 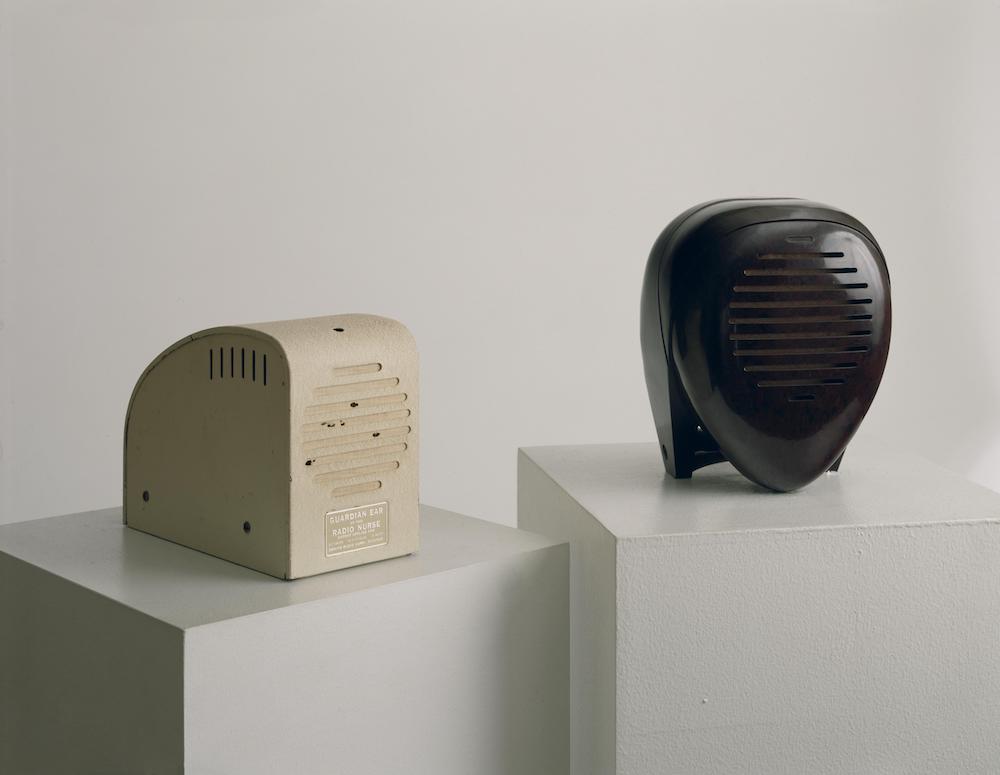 He designed an early baby monitor in the ’30s.
Near the beginning of his work as an industrial designer, Noguchi conceived Radio Nurse, an evocatively shaped speaker that, when connected to a receiver called Guardian Ear, served as a baby monitor for mothers and fathers in the early years of technology-abetted parenting. It was made with Bakelite, the pioneering form of plastic found now in the form of vintage jewelry and tchotchkes in flea markets across the land, and as noted on the website of the Metropolitan Museum of Art (which holds one of the radios in its collection), “the highly sculptural form evokes an abstracted human head: the eponymous surrogate nurse.” 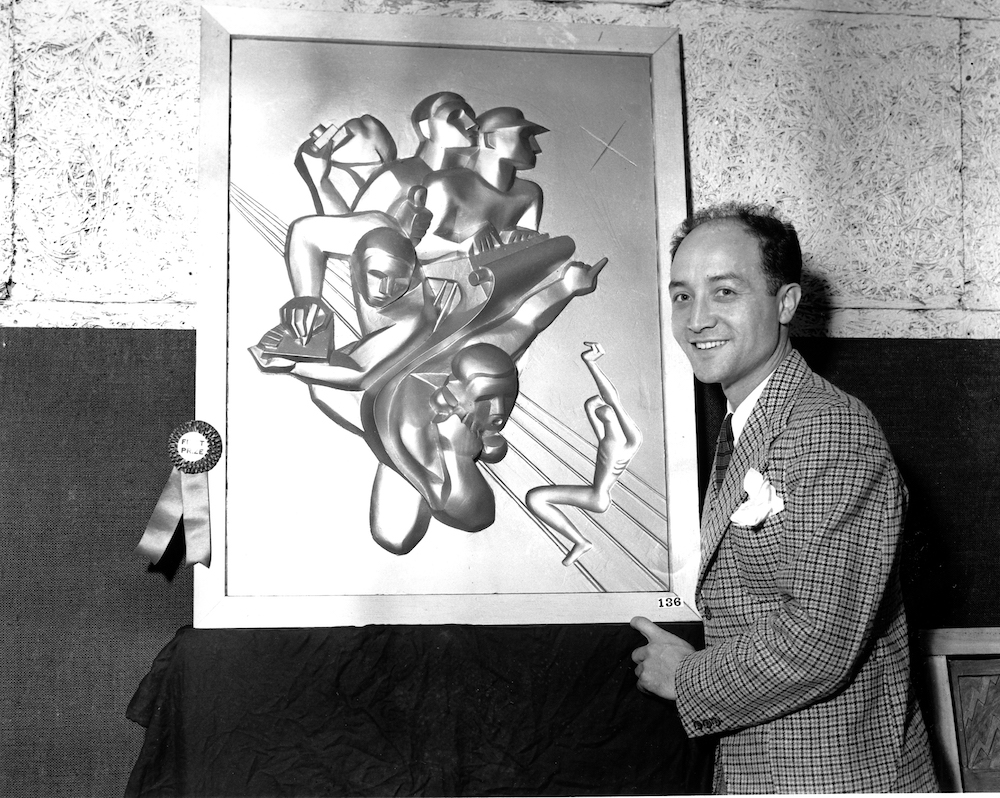 His first major commission in the U.S. was a frieze for a building at Rockefeller Center.
In 1938, Noguchi won his first major commission in the U.S. for the creation of a stainless steel bas relief for the facade of the Associated Press Building at Rockefeller Center in New York. Titled News, the 22-foot-tall piece pays tribute to that ever distinguished and noble profession: journalism. And it tapped into Noguchi’s early interest in socially minded art. As Brett Littman, the director of the Noguchi Museum in New York, wrote when he curated a 2019 exhibition of public art at Rockefeller Center inspired by News, Noguchi was “furiously pursuing civic art at this time. In 1936, he went to Mexico City to work on a sculptural mural, Historia de México, at the Abelardo L. Rodríguez Market, alongside Marion Greenwood and Diego Rivera. Despite having an affair with Rivera’s wife, Frida Kahlo (who kept a box of butterflies Noguchi gave her inset above her bed, so she could gaze up at it), Noguchi was pretty aligned with Rivera: he shared Rivera’s political convictions, and his view of art as a motor of social change.”

He did not find favor with Robert Moses.
Robert Moses, the determined and diabolical New York city planner who featured as the subject of Robert Caro’s lionized biography The Power Broker, was presented with ideas for Noguchi-designed playgrounds that met with grim fates. After Moses nixed his pitch for a project titled Play Mountain in the early ’30s, Noguchi recalled (as quoted in Listening to Stone): “Moses just laughed his head off and more or less threw us out. I never had such a tough time. Mr. Moses took offense at me, thought I was trying to kill people, said a playground had to be tested equipment and that New York City could not afford to test my mountain.” Later, in the ’50s, Moses put a stop to the idea of a Noguchi-designed playground proposed for the United Nations building—and Noguchi heard later that Moses, to reiterate his point, threatened not to install safety railings along the East River if it was built behind his back. 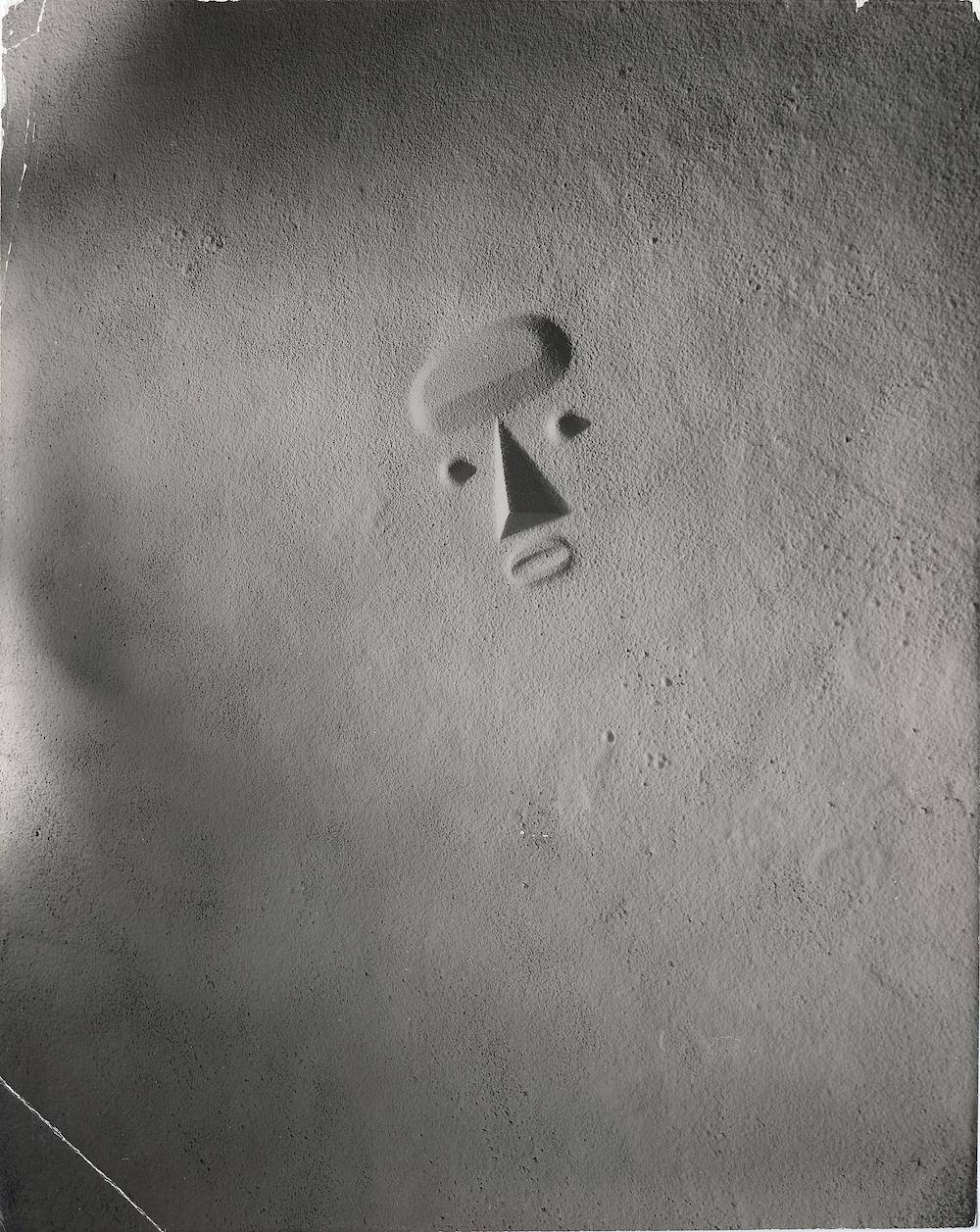 Isamu Noguchi, Sculpture to Be Seen from Mars, 1947.

He proposed an earthwork to be viewed from a unique location—on Mars.
“More than a decade before humans traveled beyond Earth’s atmosphere, Isamu Noguchi imagined civilization transplanted to Mars, gazing back at an abandoned Earth.” So wrote art historian Megan Hines in a description of a proposal for a large topographic face to be appreciated from far away in the cosmos. Hines continued: “The end of life on Earth seemed likely, even inevitable, after the atomic bombing of Hiroshima and Nagasaki in 1945. To commemorate humankind’s former home, Noguchi proposed a land art project, Memorial to Man, in 1947. [The title later changed to Sculpture to Be Seen from Mars.] In its schematized human face, its large scale, and the use of earth as its material, the project recalls such ancient land drawings as the Nasca lines of Peru—made 1,500 to 2000 years ago—thereby emphasizing civilization’s enduring history.” 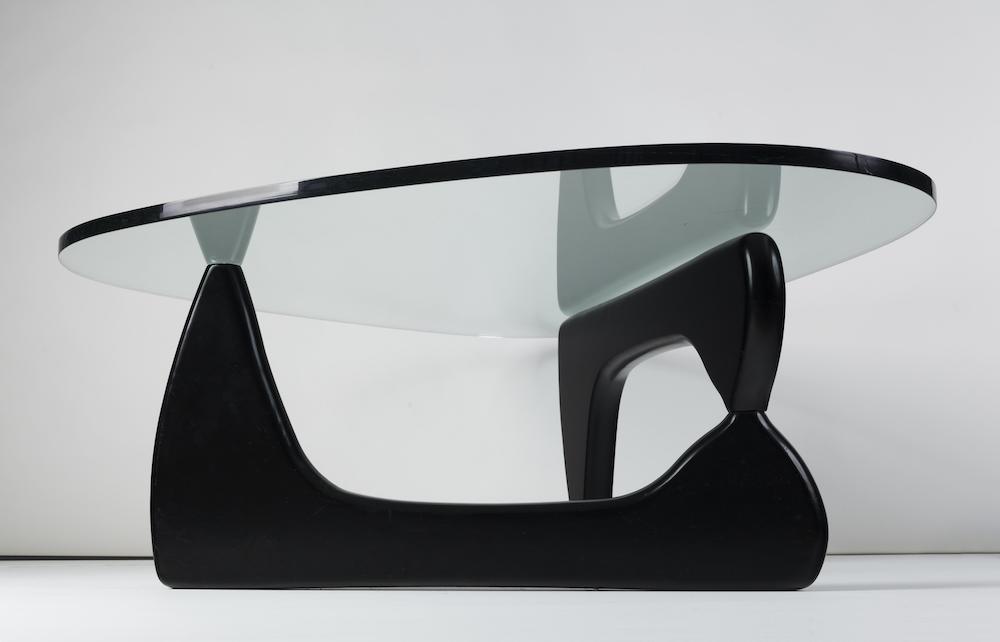 His glass-top coffee table is a staple of midcentury modern design.
Charles and Ray Eames, Eero Saarinen, George Nelson—Noguchi’s name belongs right here alongside all the most storied visionaries of so-called midcentury modern design. From its first appearance in a Herman Miller catalogue in 1948, the now-classic Noguchi Table went on to sell in droves and to define aspirations toward a kind of timeless elegance still being aspired to. As per the Herman Miller website today, the design is “the perfect balance—literally—between art and furniture.” Also: “The ethereal result does not diminish the practical design—a sturdy and durable table.” 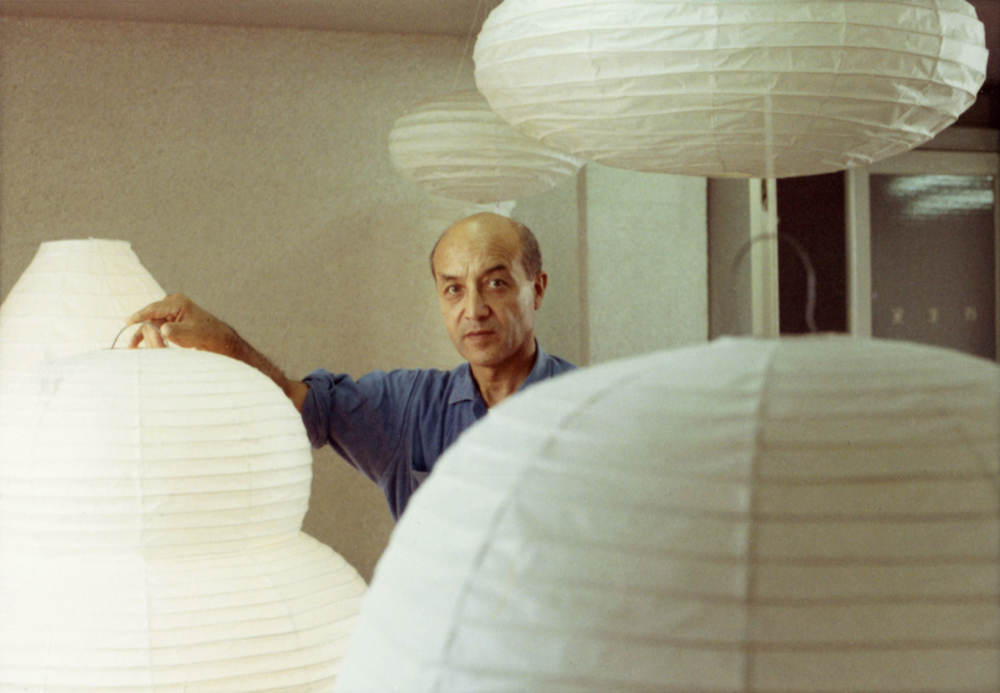 Noguchi with Akari light sculptures in 1968.

His majestic paper lamps are iconic, too.
And then there are the Akari lanterns that Noguchi introduced in the 1950s—and that remain popular today. Describing them in a catalogue for the Noguchi Museum published in 1987, the artist himself wrote, “The quality of Akari is very much related to the materials of its origin: ‘washi,’ the hand-made paper from the inner bark of the mulberry tree, so superb for the purpose of transmitting light, and ‘higo,’ the bamboo ribbing, which can be bent and shaped in numerous ways.” A bit later, he adds: “Inherent in Akari are lightness and fragility. They seem to offer a magical unfolding away from the material world.” 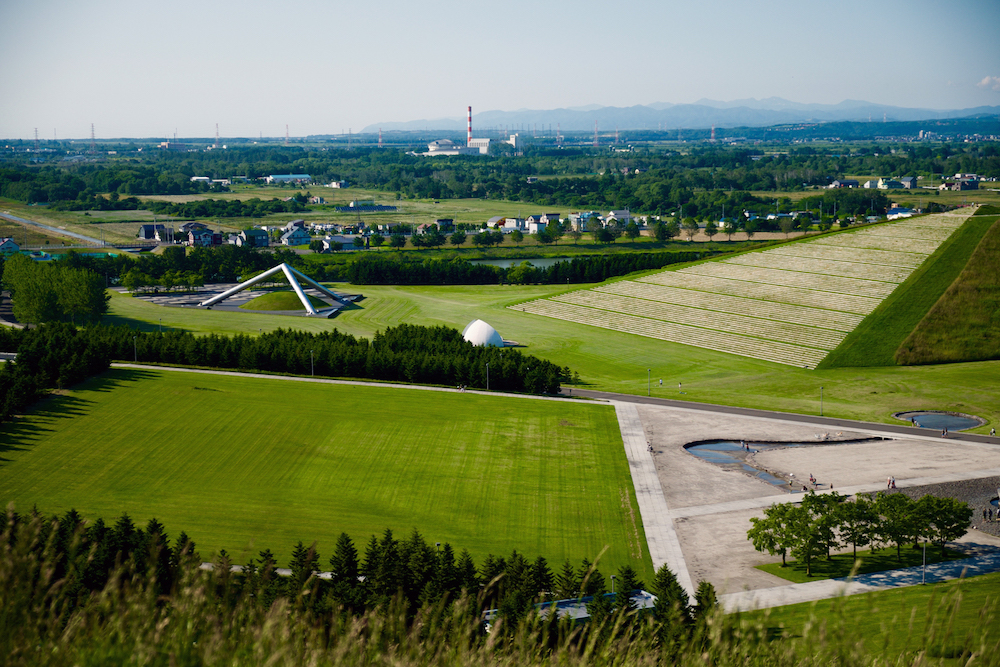 He designed an extremely dreamy park in Japan.
The city of Sapporo announced plans to build Noguchi’s vision for Moerenuma Park, a 485-acre public expanse of land based on play-oriented designs culled from five decades, in 1988—just a few months before the artist’s death. The plan went ahead and, since its completion in 2005, the park has been a refuge. Made up of “mountains, rivers, beaches, and forests of play equipment,” architecture critic Alexandra Lange wrote in Curbed, Moerenuma “combines Noguchi’s greatest ambition, in terms of scale, with his smallest, in terms of audience. In any chapter on the artist and designer’s desire to shape space, Moerenuma is the endpoint.” 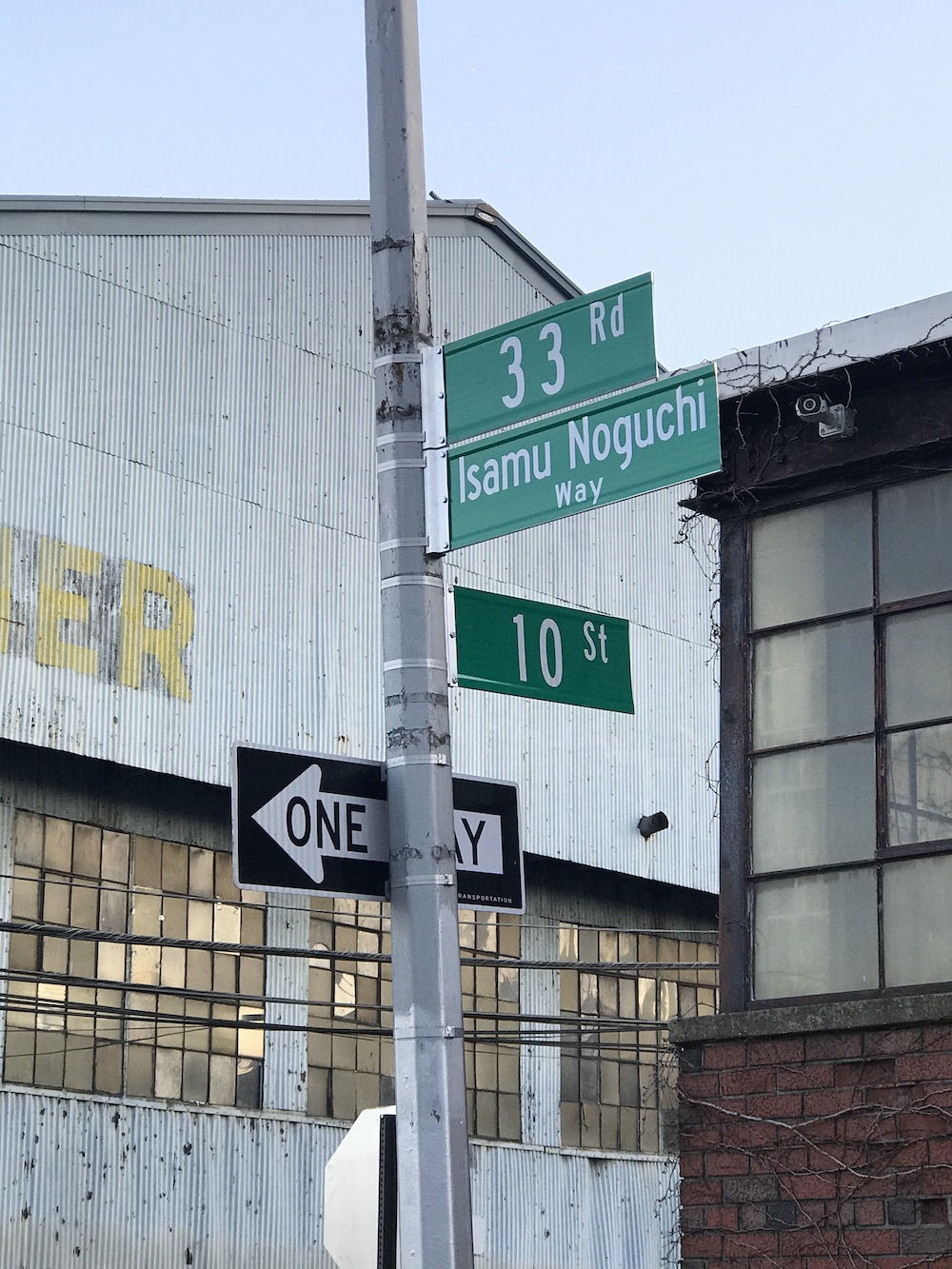 He has his own street name.
In November 2020, a stretch of street by the Noguchi Museum in New York was officially designated as Isamu Noguchi Way. It pays tribute to the working studio that Noguchi himself transformed into a museum to hold and show his work in perpetuity. And it’s a new way to refer to a destination worth visiting in Long Island City, Queens, where sculptures live with and among one another in indoor space as well as in a serene garden with places to pause and reflect on forms of beauty that only get better with time. 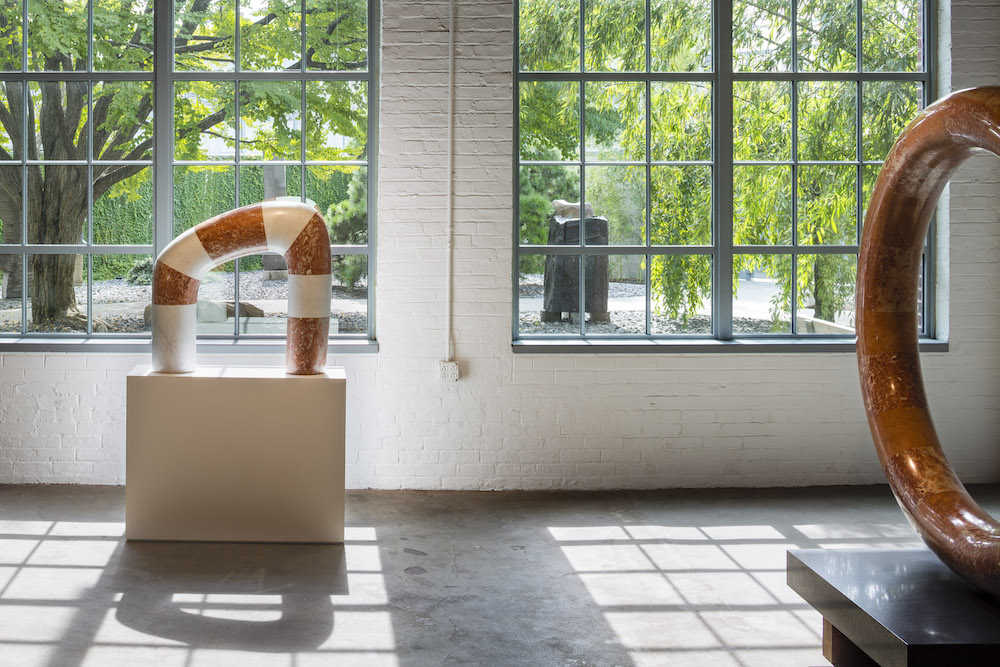 The Noguchi Museum in New York.

PrevPreviousDaniel Arsham joined the Cleveland Cavaliers as creative director.
NextThousands of US Museums Could Close Forever as the Financial Effects of Lockdown Turn Existential, a New Report FindsNext
On Key