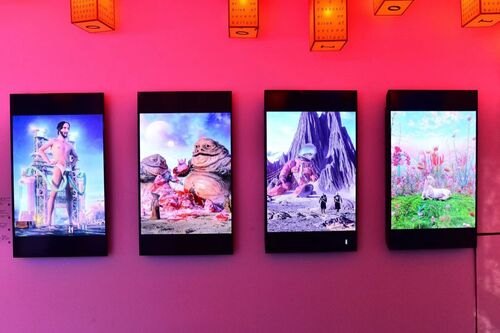 Block Create Art’s business took off by complete surprise. When the Beijing-based, blockchain-focused art and technology company started working with UCCA Lab (the special programs department of UCCA, China’s foremost contemporary art museum) last September on an exhibition of non-fungible tokens, NFTs were still unknown to the majority of the art world. But that changed almost overnight when Christie’s announced plans to auction the work of digital artist Beeple around a month before the exhibition opened.

“The Beeple sale has taken the Asian market by storm,” said Jacky Ho, the vice president and head of evening sales for modern and contemporary art at Christie’s in Hong Kong. Among the 33 bidders for Beeple’s work Everydays: The First 5000 Days (2021), 18% were from Asia, according to Christie’s. Although the proportion of Asian bidders was smaller than those from the Americas (55%) and Europe (27%), some were amid the top contenders, bidding as the price reached astronomic heights. Vignesh Sundaresan, a Singapore-based crypto investor, won the work for $69.3 million. The underbidder, Chinese crypto investor Justin Sun, was outbid in the last 20 seconds, as he later revealed on Twitter. 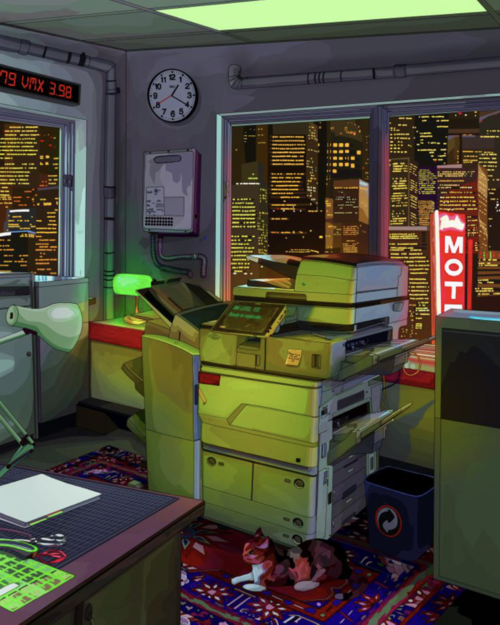 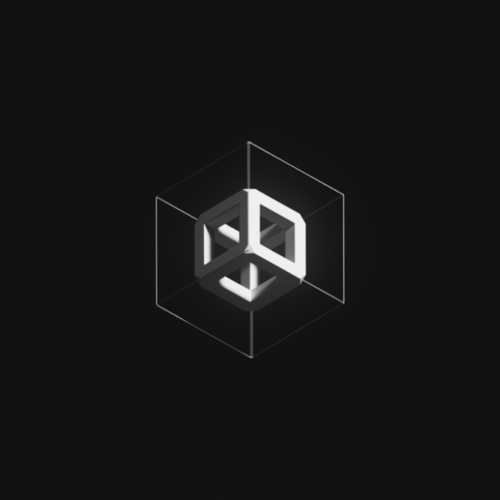 Murat Pak, still from The Cube, from “The Fungible,” 2021. Courtesy of Sotheby’s.

The Beeple sale marked a milestone in the development of NFT art worldwide. Following its success, other established auction houses and galleries including Phillips, Sotheby’s, and Pace rushed to join the race, announcing plans for sales and exhibitions of NFT works one after another in April. In mid-April, digital artist Murat Pak’s collection “The Fungible” sold for $17 million at Sotheby’s. At Phillips, Replicator (2021) by Canadian digital artist Mad Dog Jones, whose real name is Michah Dowbak, achieved a final price of $4.1 million on April 23rd. In addition to U.S. dollars, Phillips said it would accept the cryptocurrency Ether as payment for the sale. Next week during its evening sale of 21st-century art, between lots by Mark Bradford and Kerry James Marshall, Christie’s will offer a set of nine Cryptopunks, one of the earliest forms of NFT-backed digital art to go viral, which is expected to fetch upwards of $7 million. Also next week, Christie’s Education and the AndArt Agency will hold an online course in Mandarin titled “Understanding Crypto Art and NFTs.”

China’s hardline stance on cryptocurrency might have hampered early adoption of blockchain—a decentralized digital ledger that publicly tracks cryptocurrency sales—over the past few years. But the government’s recent embrace of blockchain and cryptocurrency—China recently became the largest nation to mint an official digital currency, the digital yuan—and Asian collectors’ interest in NFTs are putting the country on track to become a world leader in NFT art.

“The development of NFTs in China lags behind the scene overseas, because NFT transactions involve the sensitive topic of virtual currency,” said Elodie He, the executive in charge of media relations and exhibitions at Block Create Art (BCA). She added that when BCA was founded in 2018, it was one of the first companies of its kind, focusing on the novel NFT format long before it came to the global art industry’s attention. “We didn’t have many competitors when we started, but now after Beeple, many small platforms have started emerging [in China],” He said. 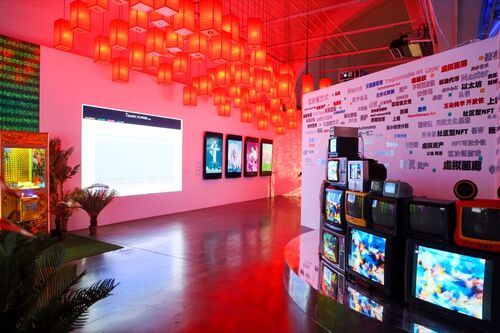 Installation view of “Virtual Niche: Have You Ever Seen Memes in the Mirror?” at UCCA Lab, Beijing, 2021. Courtesy of Block Create Art (BCA).

But in the first few months of 2021, the country has been making bullish steps on the use of cryptocurrency and blockchain technology, and appears less concerned with their perceived threats to the central bank. This March, blockchain was mentioned in a draft of China’s national five-year plan, the South China Morning Post reported—the first time the technology appeared in any official document. And then in mid-April, shortly after China launched the digital yuan, the National Development and Reform Commission said in a press briefing that blockchain will be used in managing the flow of information along with other emerging technologies such as cloud computing and artificial intelligence. “China will find its own way for NFTs to grow, and policies and regulations will follow,” He said.

Described as the first major NFT exhibition in the world, “Virtual Niche: Have You Ever Seen Memes in the Mirror?” was organized by BCA and hosted by Beijing’s UCCA Lab from March 26th through April 4th, and by Shanghai’s JinArt Institute from April 9th ​​through 11th. The exhibition showcased works by Beeple, Pak, and others, and attracted over 10,000 visitors in total, according to He.

Kang Song, who oversees exhibitions at JinArt Institute, said “Virtual Niche” was more popular than its usual exhibitions (most of which focus on traditional Chinese art). “There were about 2,000 visitors and many of whom were very enthusiastic,” he said. “It was a [non-selling] exhibition, but we received a lot of price inquiries.”

On the collector side, Asia’s crypto professionals are jumping on the NFT bandwagon. BCA’s founder Bohan Sun graduated from the Central Academy of Fine Arts in Beijing, a top-tier art school, and he was one of the earliest crypto investors in China. Sundaresan, who won the historic Beeple auction, is the founder of crypto-based fund Metapurse.

For Sun, the Beeple underbidder and outspoken founder of the blockchain platform Tron, NFTs are a new way to generate buzz. After founding his own NFT investment fund, Just NFT, at the end of March, he won a collection of Pak’s work at Sotheby’s first NFT auction. The fund is only acquiring artworks priced at or above $1 million, and has purchased works by blue-chip artists including Pablo Picasso and Andy Warhol, in addition to NFT artists, according to a statement from Tron.

“Asian buyers and collectors are ahead of the market, and they are very open and receptive to new art mediums,” said Ho of Christie’s. “A lot of discussions on NFTs are going strong in the region, which extends beyond art to other fields including music and watches.” In mid-April Wing Shya, the acclaimed Hong Kong photographer, launched Asia’s first NFT art collaboration with singer Eric Chou for the latter’s music video. 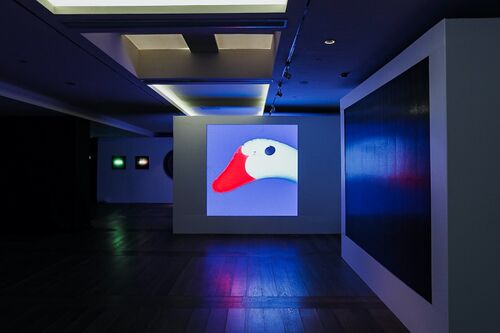 Sun Yitian, installation view in “Virtual Niche: Have You Ever Seen Memes in the Mirror?” at Jinart Institute, Shanghai, 2021. Courtesy of Block Create Art (BCA).

Given the decentralized nature of cryptocurrency technology, NFT art seemingly has a low barrier of entry both in terms of creating art and buying and selling it. The largest NFT marketplace, OpenSea, allows anyone to acquire or sell NFT art; celebrity Lindsay Lohan worked with Tron to auction her exclusive collectibles on the platform. Given the ongoing market boom, it remains to be seen whether traditional art market gatekeepers will fully embrace the new form—and how willing their audiences will be to try out the new collecting category. To many top auctioneers, the answer for now is to choose artists carefully.

“At Phillips, we’re focused on working directly with artists who are exploring the full potential of this new medium in the most compelling ways,” said Rebekah Bowling, a senior specialist of 20th-century and contemporary art at Phillips. “In the future, the artists who keep innovating in new and interesting ways will keep people engaged and bring sustained value to the market.”

In addition to working with reputable and innovative artists, Max Moore, the vice president and co-head of Sotheby’s contemporary art day sales in New York, said auction houses must play the role of educator given the nascency of the art form. “When we announced the sale, we included an FAQ on the sale page, as well as held a live public panel with prominent players in the space,” he said. “We are very much taking an educational approach to NFTs to ensure that our clients fully understand the value of NFTs and why it’s something they may or may not want to collect.” He added that Sotheby’s will unveil more NFT-related projects in the coming weeks; today, the firm announced it will accept Ethereum and Bitcoin as payment for an upcoming Banksy lot.

For BCA, the exhibition at UCCA Lab and JinArt played exactly that role for a Chinese audience. Now they’re ready to move on to sales. At the end of the month, BCA will host another exhibition with Beijing-based Yongle Auction, with many pieces being auctioned on the platform afterward. Then later this year, it aims to open a physical gallery in Beijing that will focus exclusively on NFT art.

“Although digital art is often showcased on screens, it takes a physical space for artists to communicate with collectors,” He said. “With [‘Virtual Niche’], our lighting and spatial design placed a great importance on viewers’ experience; it’s important for viewers to have a physical space to interact with art.”

BCA is also banking that China’s abundance of software engineers and artists will result in fruitful collaborations and innovative works, fueling China’s NFT art market, according to He. It is already working with some art schools in Beijing (including the founder Sun’s alma mater) to develop crypto art courses. “The West usually has more of a say in China’s art history,” she said. “Through crypto art, China will have a lot of potential [to shape] the future.”

PrevPreviousWant to Take Your Pet Fish for a Walk? There’s a Bag for That!
NextU.S. Government Seeks Forfeiture of Roman Statue That Was Allegedly En Route to Kim KardashianNext
On Key