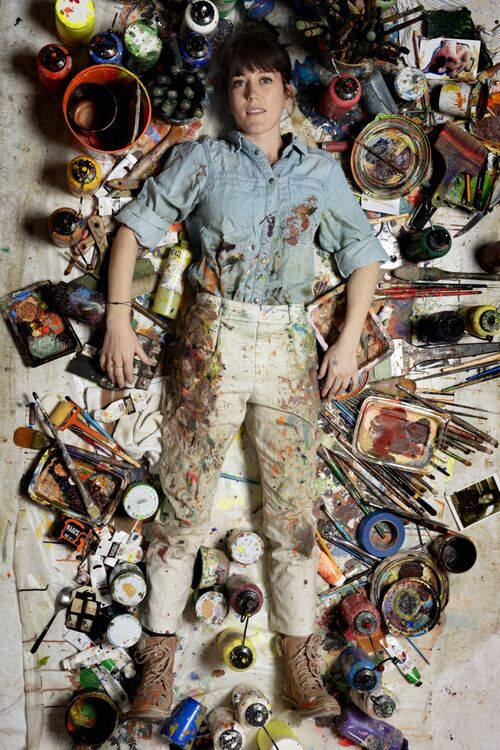 Portrait of Claire Tabouret by Guillaume Ziccarelli. Courtesy of the artist. 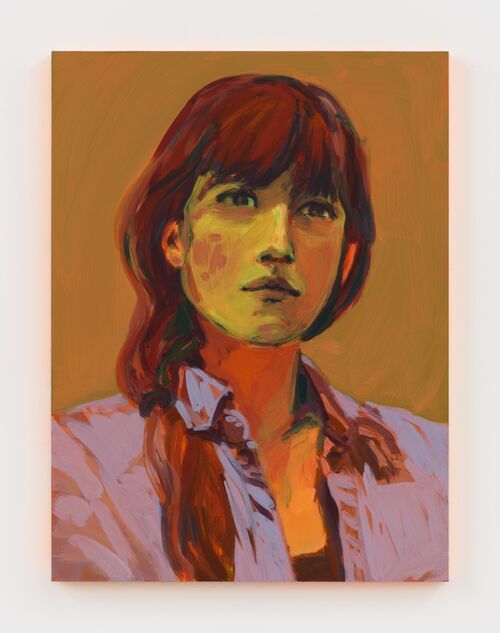 For two years, starting in 2012, artist Claire Tabouret woke up each morning and painted herself, brushing the lines of her face and gestures of her body in ink on paper. Over time, she amassed over 700 self-portraits in total, rendered in her loose, textured style, each a small notch in time.

“It was a time where I didn’t have a fixed studio. I barely had a fixed living space,” she said over a video conference call from Los Angeles. Originally from France, Tabouret moved to the city in 2015 and began working out of an airy atelier. “I was constantly camping out here and there and I had a really hard time finding my safe space to create and to paint, so I think this ritual helped create a bubble around me, like [a type of] protection.” 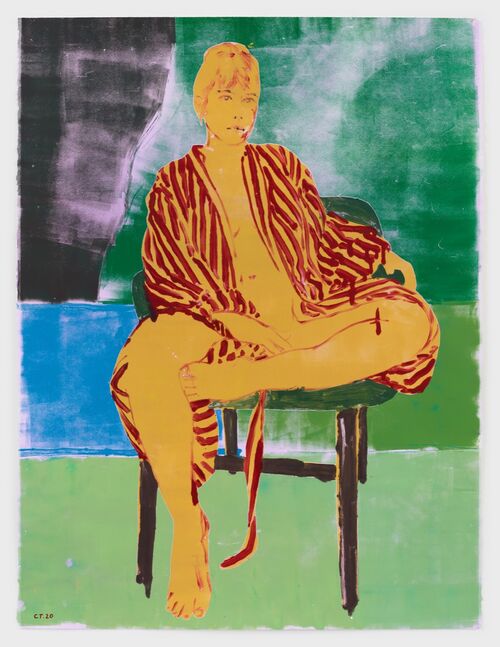 Claire Tabouret, Self-Portrait in a Robe (Green), 2020. Photo by Marten Elder. Courtesy of the artist and Perrotin. 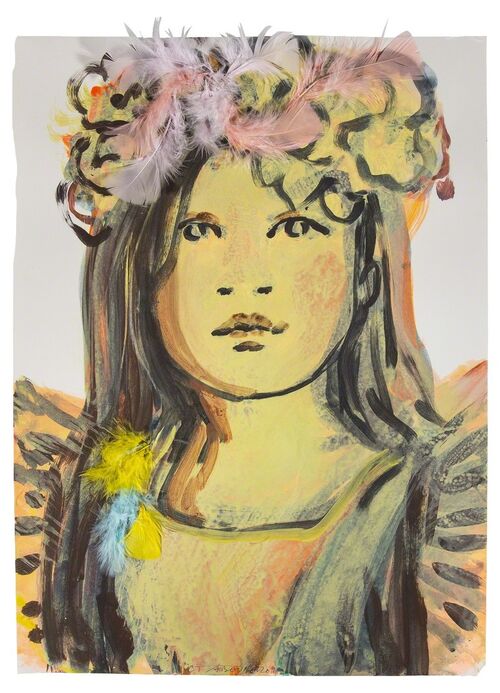 Though self-portraits have always been an intrinsic part of Tabouret’s practice, lately, they have become her sole focus while sheltering through COVID-19. From November 19th to December 31st, she’ll exhibit a group of them at Perrotin’s Tokyo space in a show titled “Lockdown Self-Portraits”; concurrently, a set of five self-portraits made before the pandemic, titled “Mirrors and Reflections,” is on display at Jordan Schnitzer Museum of Art in Eugene, Oregon, through January 10, 2021.

Tabouret began receiving buzz during the years she was working on her earlier, daily self-portraits back in 2012. Around that time, she had also begun creating a body of work based on childhood—paintings that showed brigades of nearly colorless adolescents confronting the viewer with drawn, acidic expressions, often based on images found online. Then, she worked on a series of portraits of young girls, paint smeared like makeup across their mouths and brows, unsettlingly displaced from their features. 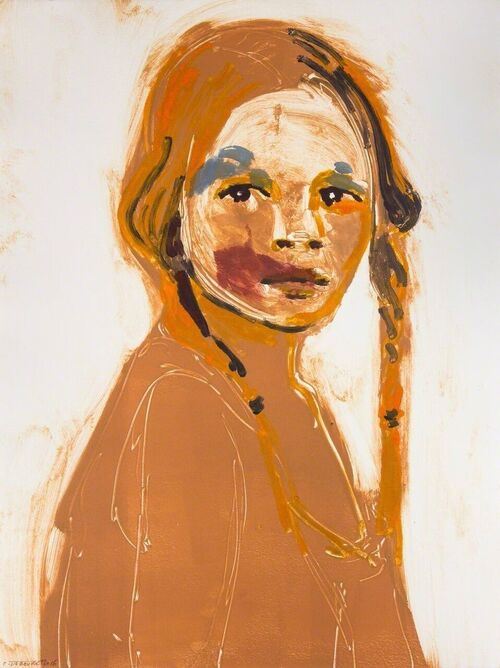 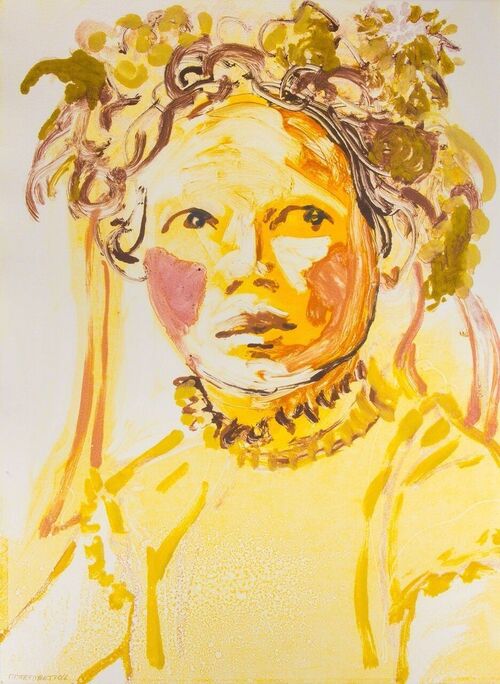 “First I paint a portrait of a child—nice and tidy,” she told Flaunt in September 2016. “Then I cover it with makeup as one of a child’s first primitive gestures related to painting. The makeup is about painting, but also about wearing a mask. Makeup, when it is not neatly applied, can be disturbing, and evoke madness, or brutality.”

Today, her works are held in the permanent collections of the Los Angeles County Museum of Art, the Musée des Beaux Arts de Montréal, and the Pérez Art Museum Miami, among many others. This past July, her painting Les déguisements (Disguises) (2015), an unsettling group portrait of children in costume, sold at Phillips Hong Kong for HK$3.5 million (US$451,600), over four times its high estimate of HK$750,000. In October, at Sotheby’s Hong Kong, another group portrait, The Blue Pyramid (2017), sold for more than double its high estimate, at HK$2.7 million (US$357,647). 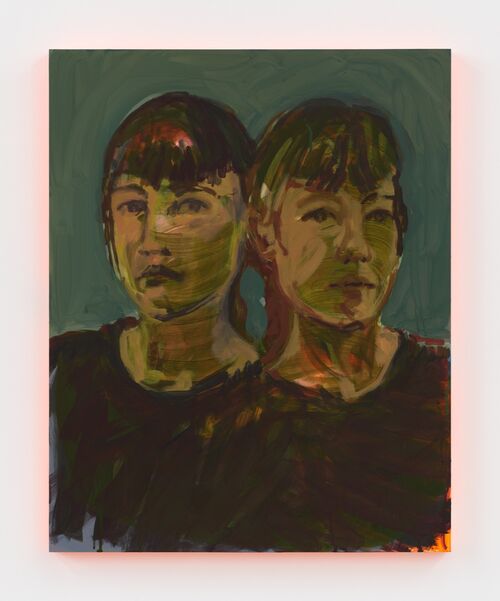 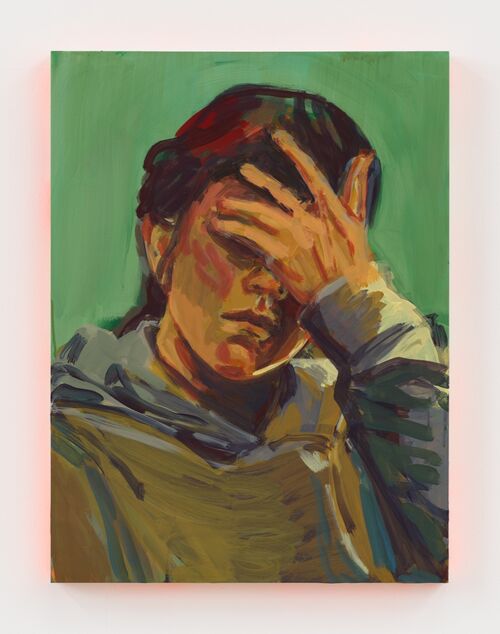 Her recent works turn inward once again. “I find that for different reasons in my life, I [have turned] to self-portraits when I was alone— either chosen solitude, or sometimes not chosen,” she said. “You make due with what you have and you have yourself.” In Self-Portrait (double) (2020), the artist painted herself twice, hinged at the ear, with thick, horizontal brushstrokes, as if one face were an impression from the paint of the other. In Self Portrait (in the studio) (2020), Tabouret lies on a couch, knees pulled up to her body, the composition bisected by the yellow wall behind her.

“Half of the painting is…this abstract, massive color of yellow. And it’s kind of weighing on the body, which is disappearing into the couch,” she said of the latter work. It’s “about a very heavy feeling.” 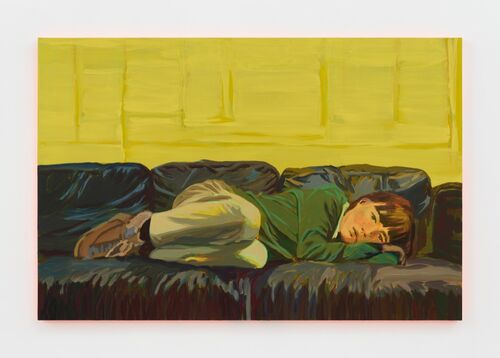 Claire Tabouret, Self-portrait (in the studio), 2020. Courtesy of the artist and Jordan Schnitzer Museum of Art.

In these self-portraits, Tabouret is often withdrawn, receding despite the fact that she is the only figure in each composition—besides her dog, George, whom she holds in her arms, close to her body. Much of Tabouret’s work has involved the dynamic of two or more people, but here, the only person the artist contends with is the viewer. 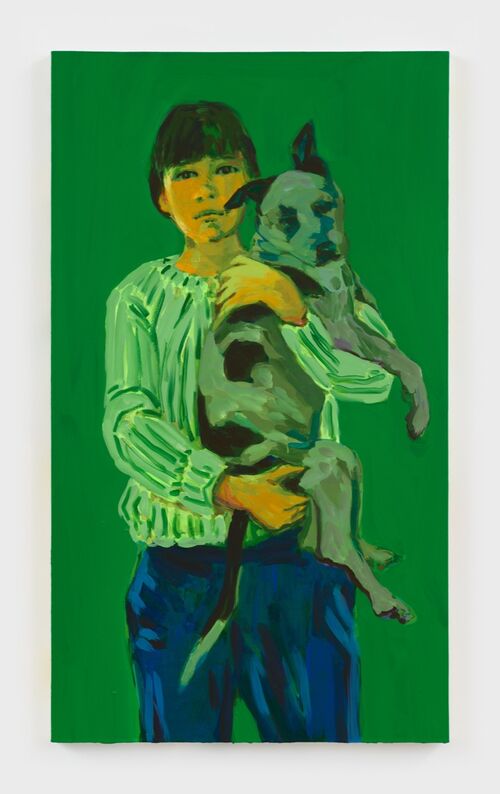 Claire Tabouret, Self-portrait with George (green), 2020. Courtesy of the artist and Jordan Schnitzer Museum of Art. 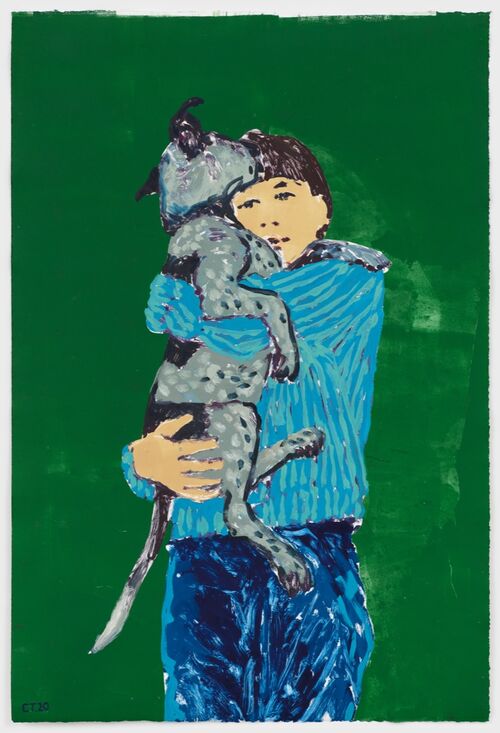 Claire Tabouret, Self-Portrait with George (Green), 2020. Photo by Marten Elder. Courtesy of the artist and Perrotin.

In past work, Tabouret has explored identity—or the loss of it—within groups, as well as the tension between people in intimate contact. In her two-part show in 2018, “I am crying because you are not crying,” she repeated the forms of two people locked together, grappling one another in slightly different positions, their heads always touching.

“At the time, I was trying to express the difficulty of a heartbreak and separation,” she said. “And the image I had in mind was this impossibility of communication, when two people are banging their heads against each other.” 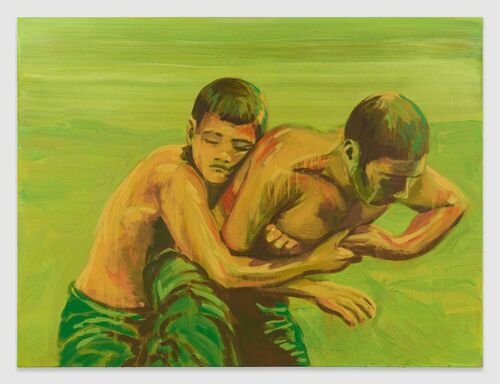 Tabouret began searching the internet for videos and images of animals in combat, lowering their heads to meet. The opposing force of their bodies reminded her of wrestlers. “One is pulling and just one is trying to escape—and that’s [like] a breakup, because one wants to leave and one doesn’t want to let go,” she said.

In much of her work, she noted, she has painted figures who command attention and take up space, from the alluring yet ominous forms of young aristocratic women in Les Debutantes (Dark Blue) (2015) to the heroic stances of the female subjects who appear in Battleground (2016) and The Circus (2018). 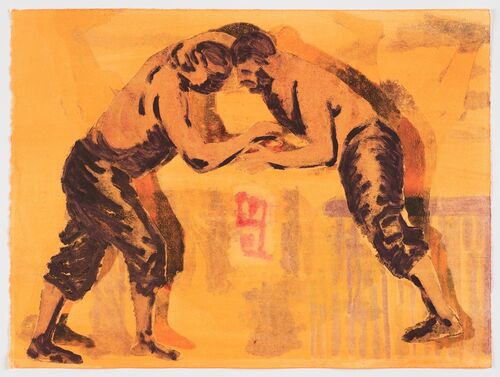 In Between Us (orange), 2018.
Claire Tabouret
Almine Rech

In these new self-portraits, the self-assurance of the figure is gone. Tabouret, in paint, shields herself behind her hands, hooded sweatshirts, and George. “It’s way more about doubt and fragility and a desire to disappear,” she said.

Tabouret points to the influence of 20th-century Swiss writer Robert Walser, who suffered a nervous breakdown and withdrew from the world to live in a mental institution. Interest in his work was renewed decades later when microtexts he had written on loose scraps of paper at the sanitarium, thought to be mere scribbles, were deciphered and published posthumously. 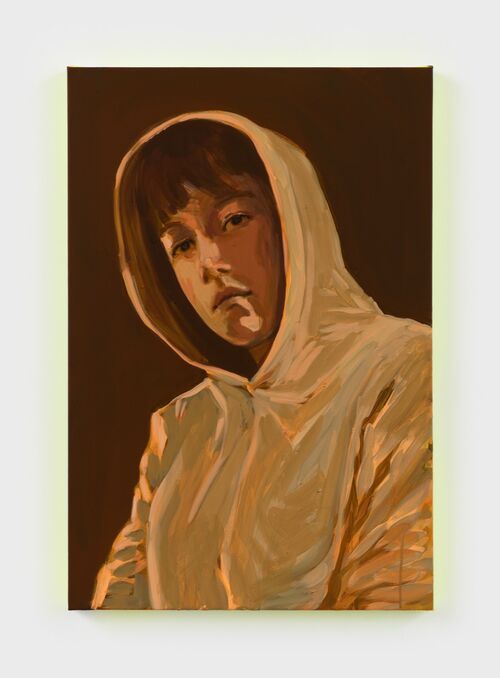 Claire Tabouret, Self-Portrait with a Hood (Pink), 2020. Photo by Marten Elder. Courtesy of the artist and Perrotin. 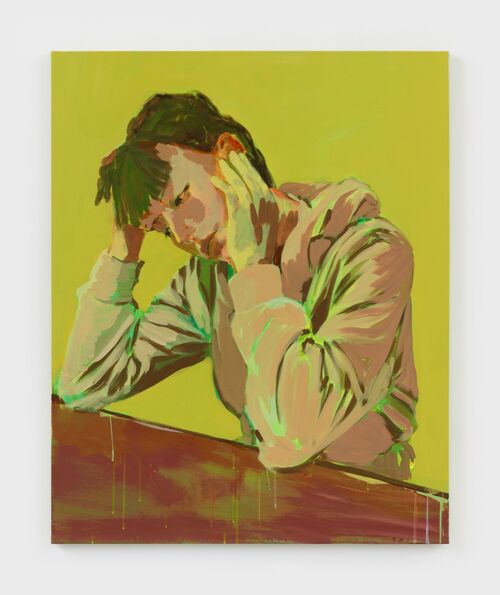 Claire Tabouret, Self-Portrait at the table, 2020. Photo by Marten Elder. Courtesy of the artist and Perrotin.

Walser didn’t just disappear from the public eye; critics have noticed that sense of disappearance extends to his style of writing as well. In his essays, German writer and academic W. G. Sebald has written that Walser’s language “has the tendency to dissolve upon reading, so that only a few hours later one can barely remember the ephemeral figures, events, and things of which it spoke.…Everything written in these incomparable books has—as their author might himself have said—a tendency to vanish into thin air.”

Tabouret’s paintings, too, have the quality of ephemerality, of retrieving memories from long ago—the colors are slightly off in tone, the lines degrading as you try to bring them to mind. She likens skin to the capricious surface of water—a connection that has stayed with her since she first encountered Monet’s water lilies as a child. “There’s something about a human face.…[It is] constantly in motion, constantly escaping, constantly mysterious—and painting allows me to paint this state of [being] unfixed,” she said. 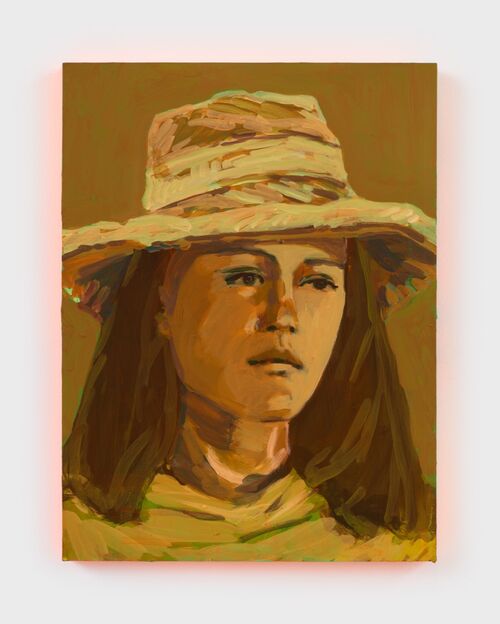 Claire Tabouret, Self-Portrait as a Tired Gold Miner, 2020. Photo by Marten Elder. Courtesy of the artist and Perrotin. 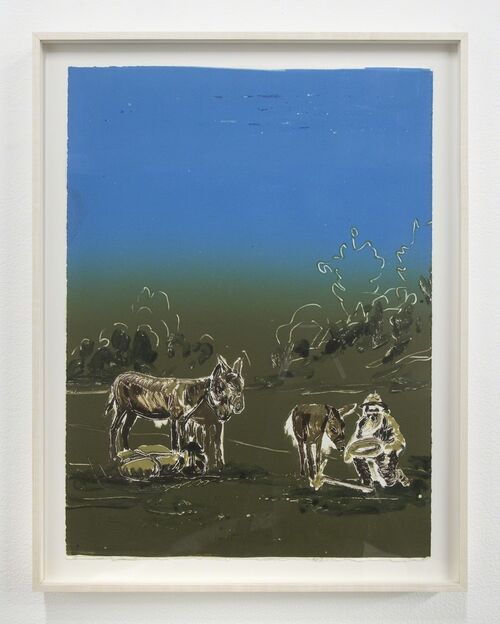 Paintings, too, she believes, are never static, and it was her early experiences with Monet, and then Manet, which have shaped her views on the medium. Her self-portraits mark the passage of time for the artist, but the viewer, in returning to the works, contributes to their changeable nature as well.

“Paintings are not dead objects,” she said. “[They] actually evolve—the way you look at it—because you’re going to change.…It can be this dialogue that teaches you things your whole life. A good painting for me should be that.”

PrevPreviousA Top Gagosian Director Has Been Suspended Without Pay Following Allegations of Misconduct
NextWhat I Buy and Why: Collector Joy Simmons on Where She Hunts for Exciting New Art and What It Has in Common With RadiologyNext
On Key