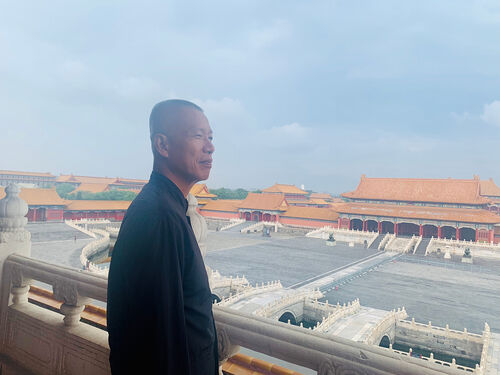 When I think of the 2008 Beijing Summer Olympics, I mostly remember my mother’s reaction to the opening ceremony. No other nation, according to her, could orchestrate and design a fireworks display as spectacularly as China. Years later, I would discover that the showcase that made my mother beam with pride was conceived of not by a nation but by a singular Chinese artist, the renowned Cai Guo-Qiang.

“Sometimes art can help make the political climate more open and help society become more free,” Cai told the Financial Times in 2017. “In my own art, I try to use my personal voice and effort to enable some Chinese people to see the possibilities of another kind of China. A more open China.” 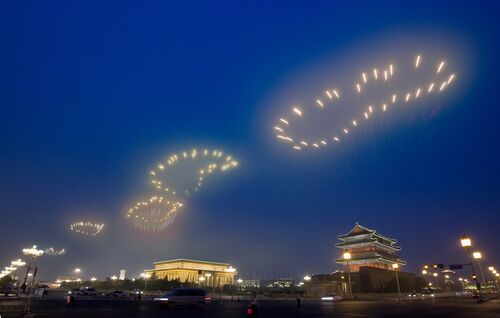 Today, ahead of the 2022 Winter Olympics, in which Cai is involved (though he can’t yet reveal his exact role), the artist returns to Beijing with a major retrospective at the Forbidden City’s Palace Museum. On view from December 15, 2020, to February 28, 2021, “Odyssey and Homecoming” coincides with the 600th anniversary of the former imperial palace and marks the museum’s first solo exhibition of contemporary art.

While Cai’s pyrotechnics helped shape the world’s perceptions of China when the country was emerging as a major global power in 2008, “Odyssey and Homecoming” does almost the opposite, presenting the West to China. Exhibiting artworks created during Cai’s travels through Europe and the United States, the retrospective hones in on Western art’s influence on Cai’s practice. 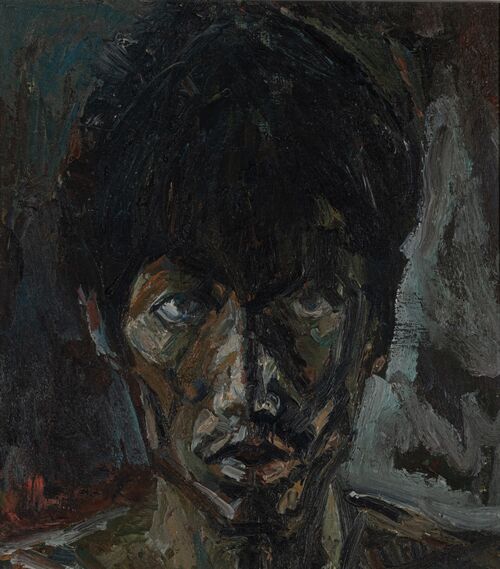 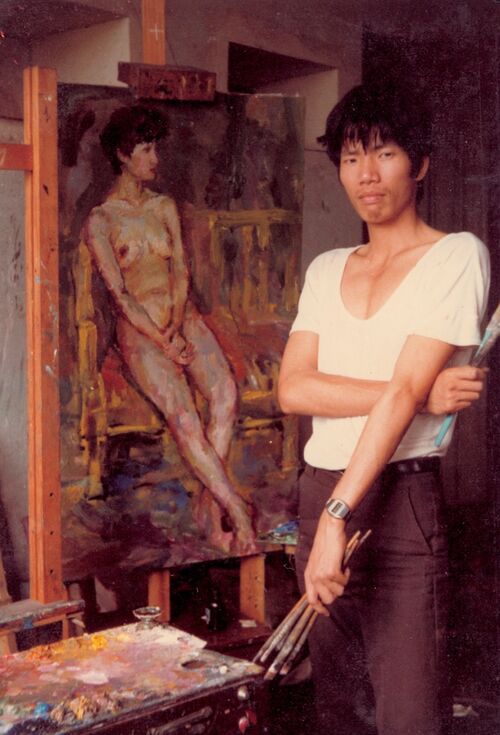 Portrait of Cai Guo-Qiang with his oil painting in China in 1983. Courtesy of Cai Studio.

“At a time when the world is increasingly closed off and isolated, filled with chauvinist doubts and anxiety, I hope that the visitors can see in this exhibition the integration and coexistence of the East and the West, the ancient and the contemporary, and to reflect on whether different civilizations can respect each other in the face of the pandemic and the disruption of global connections,” said Cai.

After completing the fireworks displays for the opening and closing ceremonies of the Beijing Olympics, Cai and his eldest daughter, Wen-You, traveled to Europe to trace the life journey of Spanish Renaissance artist El Greco. “While I visited the Museo del Prado primarily to see the works of El Greco,” Cai said. “I was struck by the Prado’s collection and works of the Old Masters, including Velázquez, whom people of my generation had admired since childhood.” When he was invited years later to create new works in dialogue with the Prado’s collection for his 2017–18 solo exhibition “The Spirit of Painting,” Cai described it as a dream come true. 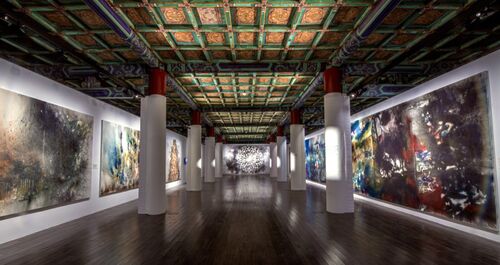 Cai Guo-Qiang, installation view of “Odyssey and Homecoming” at the Palace Museum, 2020. Photo by Lin Yi. Courtesy of Cai Studio.

In one such work, Painting Rubens’s Diana and Satyrs (2017), Cai renders the Baroque master’s twisting drapery and curly beards with surprising clarity given the unpredictable and volatile nature of Cai’s medium of choice—gunpowder. Cai’s efforts at the Prado led to the larger series “An Individual’s Journey Through Western Art History,” in which he applies his explosive process to canonical works from other major institutions, from the Uffizi Gallery to the Guggenheim.

Whereas the 2008 Olympic Games rendered Chinese artistic endeavors vulnerable to international critique and analysis of its perceived state agenda (as if nationalism were specific to China rather than endemic to the Olympics as a whole), “An Individual’s Journey Through Western Art History” repositions contemporary Chinese art, not as an object for Western scrutiny or interpretation, but as an alternative of way of viewing transnational encounters. On view in his current Palace Museum retrospective, “An Individual’s Journey Through Western Art History” represents Cai’s odyssey as an international artist. 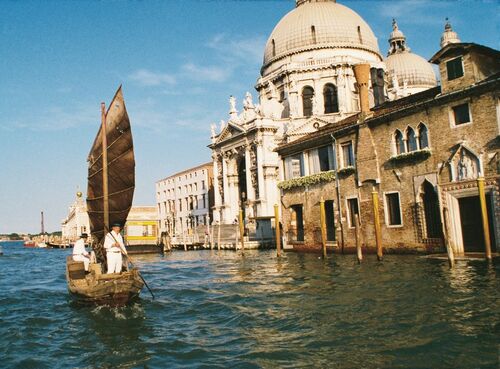 “Although I may be loved abroad, the feelings I have when going back in China are more authentic, stripping away the illusion of being in an ivory tower, protected and isolated from reality,” Cai explained. “What I face here is not only art, but the whole history and society, the living conditions; the sentiments and the subjects here are more solid, rich, sensitive, and thus more complex and challenging. From this point of view, I need to return to this state often.”

Oftentimes in his work, Cai brings his hometown of Quanzhou with him, even while in conversation with European history. Marking the 700th anniversary of Marco Polo’s return to Venice, Cai’s Bringing to Venice What Marco Polo Forgot (1995) incorporated a wooden fishing boat from Quanzhou, the port city that Marco Polo took leave from in 1291. Additionally, Cai’s groundbreaking Sky Ladder (2015)—a 1,650-foot-tall flaming ladder connecting Earth to the heavens—was realized off the shore of Huiyu Island in Quanzhou as a gift to the artist’s grandmother and his hometown. 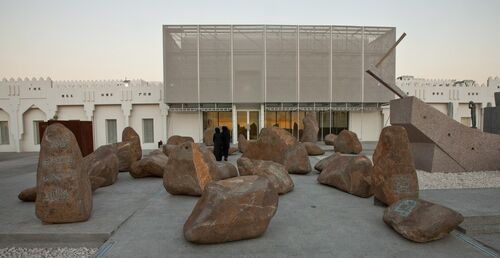 “These three words could summarize what my hometown means to me: youth, love, and cemetery,” Cai said. “More and more, the hometown takes me back to see the other gate of life. ‘Odyssey and Homecoming’ makes me realize that the journey is difficult, and the return is not easy either.”

His 2011 work Homecoming, which was presented at Mathaf: Arab Museum of Modern Art, similarly meditates on death. The installation features 62 large rocks imported along the Maritime Silk Road from Quanzhou to Doha, Qatar. Carved in Arabic with one of three lines—“all that lives will die,” “the present life is a false enjoyment,” and “to die in a foreign land is to die a martyr”—the rocks become surrogates for the tombstones, engraved with the same expressions, of the Muslim communities in Quanzhou. The installation facilitates a voyage home after death. 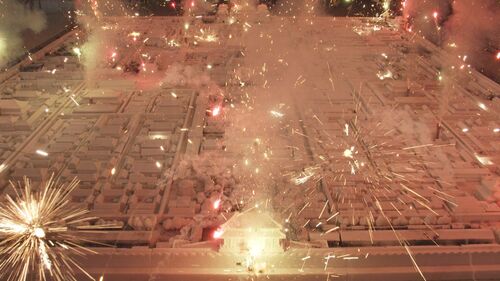 Cai Guo-Qiang, ignition of Sleepwalking in the Forbidden City: After the Fireworks, 2020. Photo by 33 Studio. Courtesy of Cai Studio.

Cai’s practice of engaging with his past can also be seen in the concluding work of “Odyssey and Homecoming.” Made in partnership with HTC VIVE Arts, Sleepwalking in the Forbidden City (2020) is Cai’s first foray with virtual reality. The artist collaborated with local craftsmen from Quanzhou to hand-carve an alabaster model of the Forbidden City, which Cai then exploded with gunpowder to create a three-dimensional gunpowder painting similar in appearance to the colorful splatters seen on the sculptural works Plum Venus (2019) and Exploding Hercules (2019). Created with footage from a fireworks display Cai organized along the Liuyang River, the VR film imagines the pyrotechnic spectacle that would have taken place 600 years ago to celebrate the palace’s completion. Cai explained, “It’s a Cai Guo-Qiang style of VR, which I jokingly call CR!”

Leading up to the retrospective, Cai had originally planned to travel to Ethiopia and Cyprus to study monastic traditions dating back to the Middle Ages, but instead found himself quarantining in his rural New Jersey studio and taking pause to reflect on his decades-long career. “Looking back on these projects lets me connect them with the problems we face now,” Cai said. “The pandemic reminds me that our planet is quite fragile, and human beings are naïve children within the vast universe. We should retrieve the more genuine and fundamental aspects of our lives.”

This article is part of a series of conversations with scholars engaged with Black art for Black History Month. See also Folasade Ologundudu’s interviews with Richard J. Powell, Bridget R. Cooks, and Darby English. *** One cannot consider the present-day field of African American art history without mention of Sarah Lewis. The associate professor of the History