At Royal Palace in Seoul, an Expansive Art Exhibition With an Ambitious Agenda

Deoksugung Palace in Seoul has lived many lives. A residence for members of the royal family during the Joseon dynasty, it became a refuge for King Seonjo in the late 1500s after a Japanese invasion laid waste to nearby palaces. At the start of the 20th century, Emperor Gojong added a Western-style residence, and the sylvan grounds became a park a few years later, when Japan occupied the country.

Now Deoksugung is hosting a tightly curated art exhibition that is one prong of an ambitious new initiative called Art Plant Asia that aims to boost international recognition of Asia’s art world, with Seoul as a vital hub within it.

Putting together a show at a carefully protected historical location amid a pandemic “was a very challenging experience, but also an interesting one,” said Jang Hyejung, whose co-curator on the endeavor was Yoon Juliat. For “Hare Way Object,” the two have installed work by more than 30 Korean artists—from modernist giants like Lee Ufan and Kim Whanki to key younger figures like Suki Seokyeong Kang and Haegue Yang—in wooden corridors once used as storage or living quarters for court servants, as well as various pavilions and a small pond on the property. 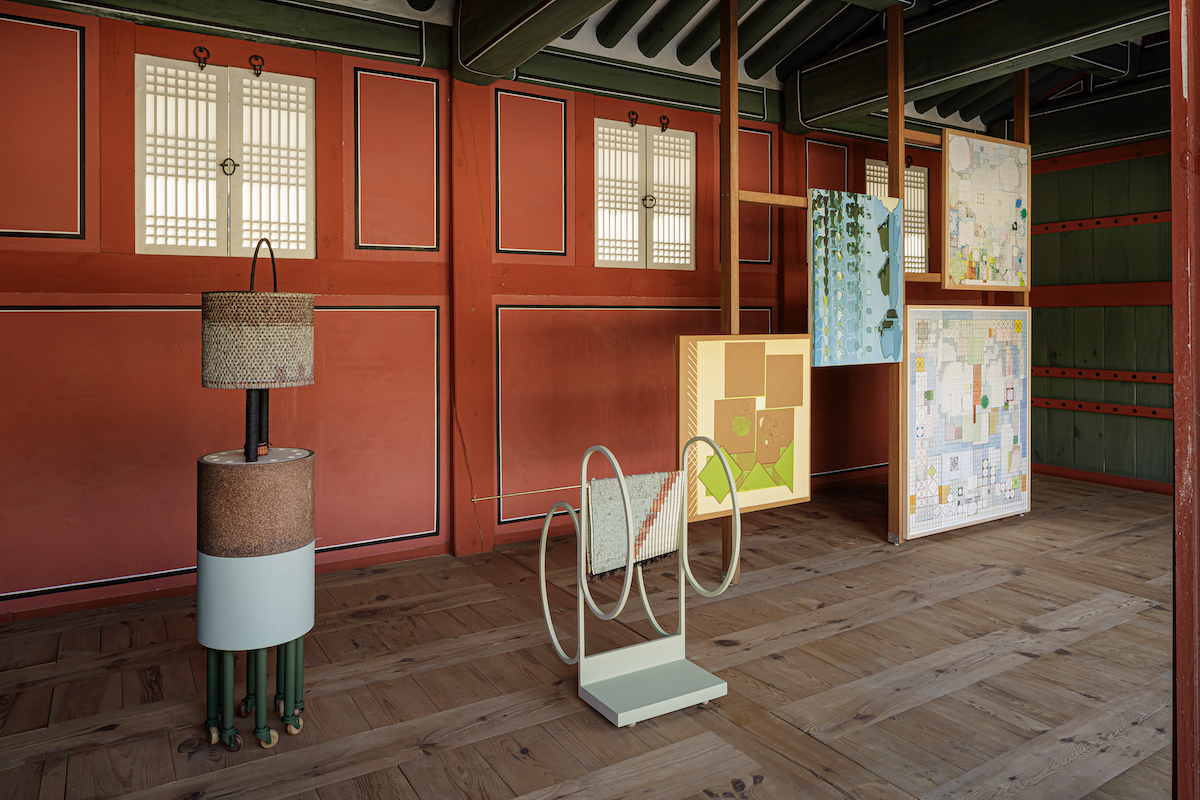 Sculptures by Suki Seokyeong Kang, at left; at right, paintings by Park Junghae.

A fantastical Lee Bul—one of her ineffable alien life forms—looks strangely at home as it hangs at the center of a structure in this traditional environment. Particularly given its title, Chiasma (2005), which is the point where chromosomal material is exchanged, one might take the piece as a kind of mascot for Art Plant Asia, which is a hybrid of a development project, a multifarious curatorial platform, and an educational forum.

Art Plant was created by Yoon Hoon Yul, a businessman who founded the Jeongdong 1928 Art Center, not far from the palace, working with the curator Lee Seunghyun, who is the director of the inaugural edition. (Support has come from the private sector and the Seoul government.) The organization, Jang said, has been motivated by the fact that, while East Asia accounts for 24 percent of worldwide GDP, its contemporary art is still not necessarily well known beyond its borders.

At local galleries over the past few weeks, Art Plant has staged lectures with arts leaders and screened video interviews with dealers from 10 spaces situated throughout the Asia-Pacific region, like FOST in Singapore and Bank in Shanghai, and it held an academic conference. Covid travel restrictions meant few international visitors could attend the festivities, but the group hopes to expand its programming, and its audience, in the coming years for the annual event. 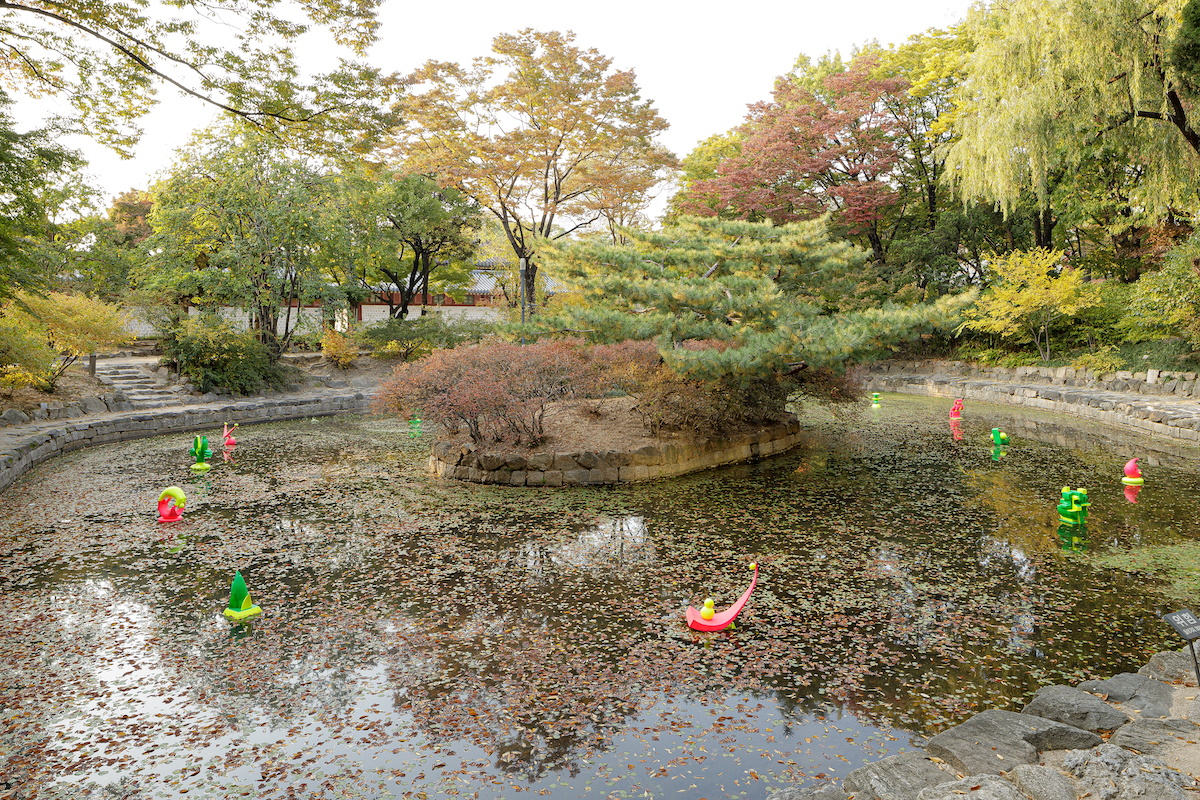 Pieces by Koo Donghee floating in a pond on the grounds of Deoksugung Palace.

As it is, Art Plant’s exhibition component has been drawing an audience beyond the typical art crowd. Deoksugung, where a changing of the guards ritual regularly occurs, is a popular tourist attractions, and so those arriving to experience history are also getting a major dose of art. (The art exhibitions at Versailles in France and the New York mayor’s residence, Gracie Mansion, are two parallels.)

The choice of Deoksugung, which was made before the pandemic, proved to be fortuitous not just for the wide crowd it attracts: you can view the entire show outside, in the open air, meaning that it could remain accessible even if health restrictions are ratcheted up. (Some new measures were introduced on Wednesday; the show runs through Sunday.)

Given the heritage status of the palace buildings, works could not be affixed to the walls with nails or tape. Instead, classic 1970s paintings by Kim Tschangyeul and Park Seo-bo have been laid down on platforms in one room, and intricate abstractions by Park Junghae are attached to wooden beams added to another. For the curators, it was a chance to get creative. “If we showed this work in a white cube, I would never suggest that kind of installation style,” Jang said. (Those seeking a white-cube affair can visit a branch of the National Museum of Modern and Contemporary Art, which is also within Deoksugung.) 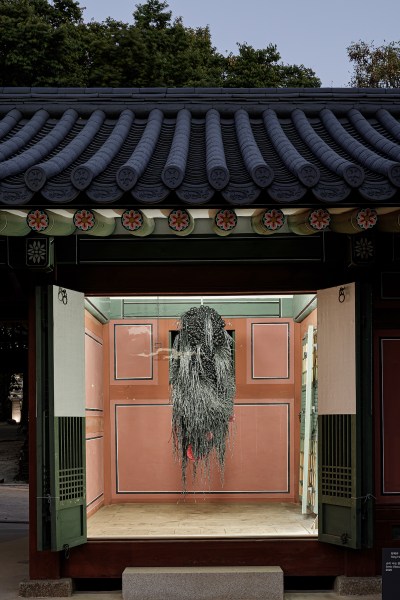 Some works, though, required almost no effort at all to show. Im Youngzoo has conceived an audio piece available on headsets, and Woo Hannah sewed funky, organ-like props that can be borrowed and worn like handbags, allowing people to become presenters. Meanwhile, Jong Oh has conjured beguiling abstract forms high in the air by threading fishing line around trees. (Forget snapping a photograph: they’re almost invisible to the eye.)

However, when it comes to caring for conventional paintings and sculptures, open-air shows have their share of difficulties. Glass windows enclose especially precious work from the elements, and visitors at some times may find that work has vanished behind shutters. “We gave some liberty to the staff,” Yang said. “So that when they say it feels unsafe, they can close them.”

That’s perhaps a fitting nod to how political power is wielded, whether in a royal palace or a presidential office: it can occur at a public ceremony one moment, out of sight the next.

Below, more photographs of “Hare Way Object,” whose title borrows an earlier name for the area it calls home, Hare Way, which is now the Jeong-dong neighborhood. 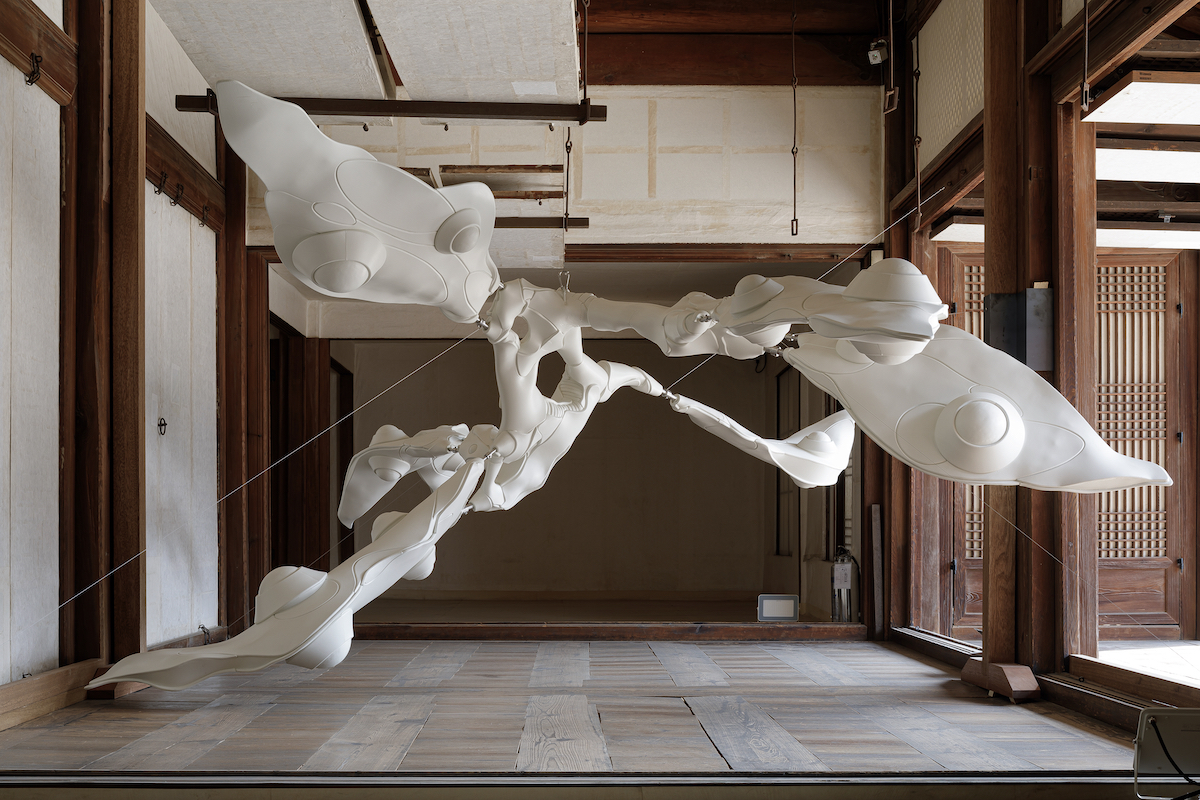 A close-up of Bul’s work. 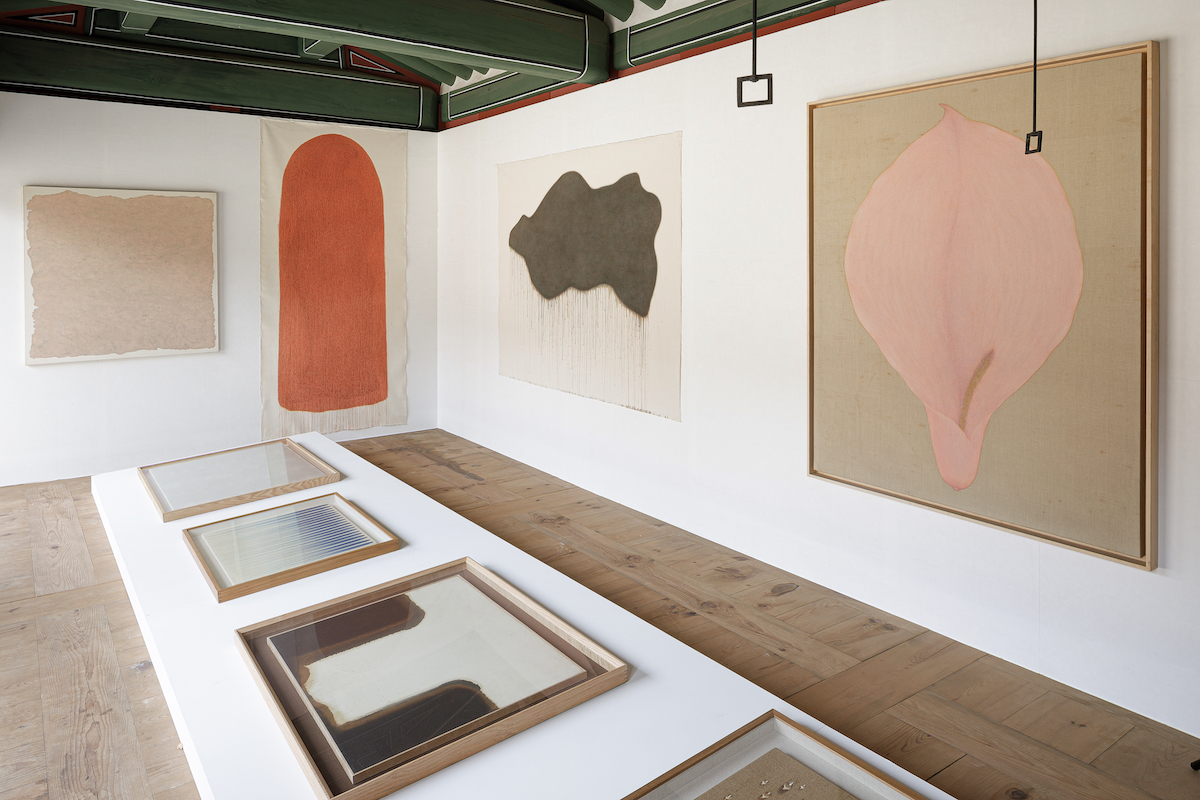 An installation view of works in ‘Hare Way Object.’ 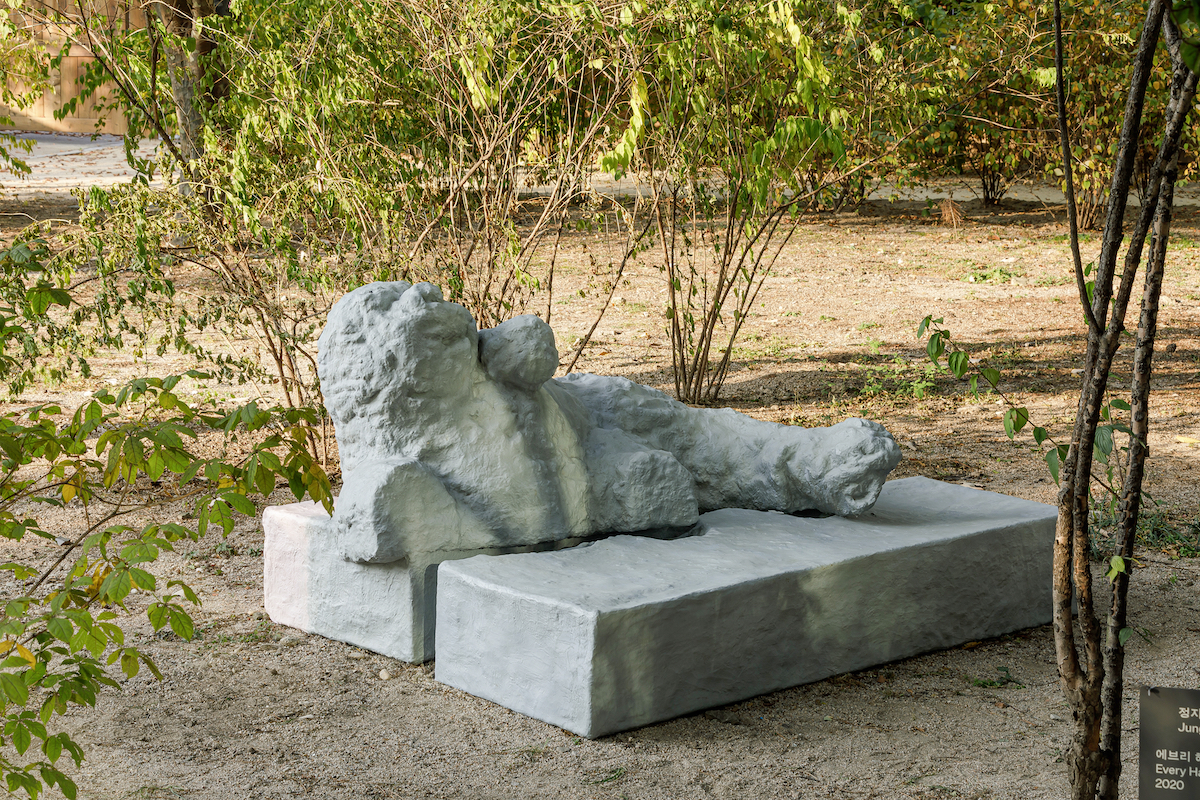 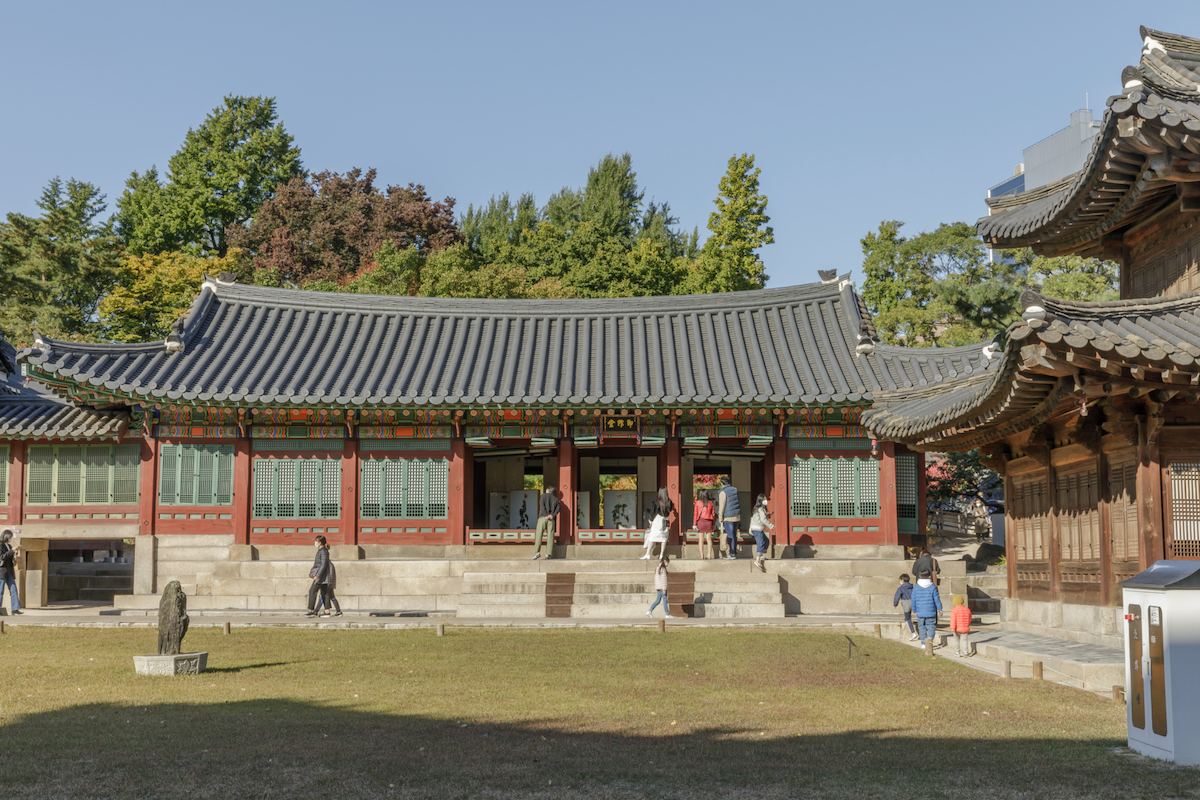 Life In Stills: An Interview with Francisco Diaz Scotto, aka Pastel

As his stunning solo show comes to a close at Hashimoto Contemporary in SF,  Francisco Diaz Scotto (Pastel) speaks about a boldly powerful body of work. Featurung new paintings inspired nostalgic memories found in this film camera at the artists family home in Misiones, Argenitina, Patio Misionero is personal and universal. The show is on view through

Białowieża Forest, on the border of Poland and Belarus, is the largest surviving remnant of a vast area of primeval woodland that once stretched across Europe. The landscape has remained unchanged for millennia, surviving partly as a hunting ground for Russian Tsars and Polish Kings. It is home to more than 5,500 plant species and

Moskowitz Bayse is currently showing Layman’s Terms, Tongue Tied, first solo presentation in Los Angeles by Aaron Elvis Jupin. Comprising a body of inks on paper alongside a series of paintings done with acrylic and vinyl on canvas, the exhibition is providing a great insight into the Los Angeles-based artist’s mindset and outlook as well