The artist and teacher Suh Se Ok, who helped guide the path of contemporary art in South Korea for decades after the country’s emergence from colonialism and war, died on November 29, according to Lehmann Maupin, his gallery in New York. He was 91.

In late 1959, Suh formed Mungnimhoe—the Ink Forest Society—as the first Korean avant-garde group grounded in ink painting. At the time, he was beginning to push that traditional medium into bracingly original territory in abstract works that sometimes consist of nothing more than ink-and-water brush impressions or lines on handmade mulberry paper. He was honing the practice to its raw, essential ingredients.

A student of calligraphy, Suh and his Mungnimhoe compatriots were intent on forging an experimental, distinctly Korean form of ink painting, eschewing the Japanese techniques that had held sway during its colonial rule of the peninsula, which ended in 1945. They were in dialogue with American and European postwar abstract painting movements such as Art Informel, while spurning their tools, unlike many of their Korean contemporaries.

Participating in a discussion in 1966, Suh championed his use of ink by explaining that “if the Korean avant-garde continued to appropriate from Western avant-gardes, it would soon lose its understanding of art altogether,” as the scholar Joan Kee has noted.

Suh generated massive amounts of visual energy, and even drama, with a bare minimum of materials. Webs of ink he laid down in quick strokes can appear to undulate, shake, or vibrate, and his marks often slyly slip into a figurative language—they can suggest flying birds or, in his most famous series, “People,” constellations of spare, interconnected human figures. Sometimes these symbolic people hold each other in tenuous chains; at other times, they form solid walls as they kneel, stand, or dance. 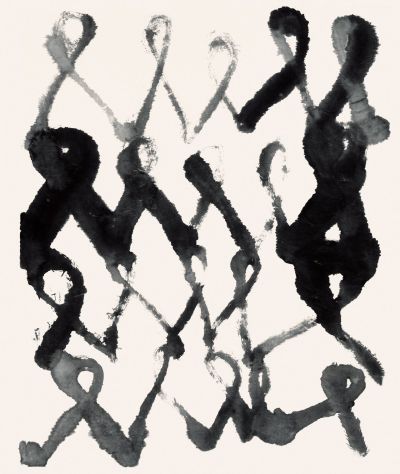 Suh Se Ok (서세옥) was born in the city of Daegu, in 1929. In 1949, at the age of 20, while still in college, he took first place in the first edition of the Korean government’s Kukjon art competition. The next year he graduated with a painting degree from Seoul National University, where he would be teaching when he founded Mungnimhoe. (He was a professor there for decades.) The group continued until 1964.

Though ink painters have long been overshadowed in South Korea and abroad by those working in mediums considered by some to be advanced, Suh exhibited widely. He participated in the 1963 Bienal de São Paulo, and was the subject of a show held as part of the 2000 Gwangju Biennial in South Korea. He had two solo outings with the National Museum of Modern and Contemporary Art in Seoul, the most recent in 2015, and four one-person exhibitions at Gallery Hyundai in the capital city, which represents Suh. His numerous accolades include South Korea’s Order of Cultural Merit, which he received at the silver level in 2012.

Suh’s survivors include his wife, Minza Chung, and two sons, Eulho Suh, an architect, and Do Ho Suh, a leading artist in his own right.

His career was a remarkable, rare example of an artist bringing new life to a medium with potentially deadly connotations. Beyond its association with Japanese colonialism, ink-brush painting—a practice dating back a millennium, to Chinese literati painting—could seem outmoded in an era of rapid, radical changes in art around the world.

In the 1966 panel discussion described by Kee, the abstract painter Yun Myeong-ro, who worked in oil, lamented those who believed that Korean contemporary painting lagged far behind that of other countries, that it was merely 20 years old, and that it would need to “persevere for another 480 years in order to reach the level of the West.”

Suh had a quick comment to offer about that. He argued that “the West must persevere for thousands of years to reach the level of ink brush painting in Korea.”