5 Artists on Our Radar This May

“Artists on Our Radar” is a monthly series produced collaboratively by Artsy’s Editorial and Curatorial teams. Utilizing our art expertise and access to Artsy data, each month, we highlight five artists who have our attention. To make our selections, we’ve determined which artists made an impact this past month through new gallery representation, exhibitions, auctions, art fairs, or fresh works on Artsy.

B. 1988, Billericay, England. Lives and works in Chelmsford, England. 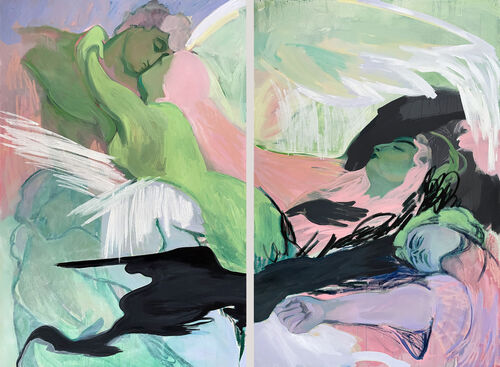 Combining classical Grecian figures with fresh, abstract shapes, British artist Amy Beager pays a clever homage to art history. Last year, Beager made her mark on the art world as a winner of the Delphian Gallery open call. Her works later appeared at London’s Saatchi Gallery, as part of the group show “Antisocial Isolation.” Recently, the Chelmsford-based artist opened a solo show with Offshoot Arts, titled “The Torches Burn Bright,” which features a series of paintings inspired by William Shakespeare’s Romeo and Juliet.

Captivated by the “vitality” of paint, Beager uses a lively mixture of refined and fluid brushstrokes, blending acrylics and oils to create celestial paintings rooted in melodrama. Her romantic compositions, exploring themes of love and tragedy, convey intimacy and melancholy through an alluring color palette of delicate hues like moss green and flamingo pink. 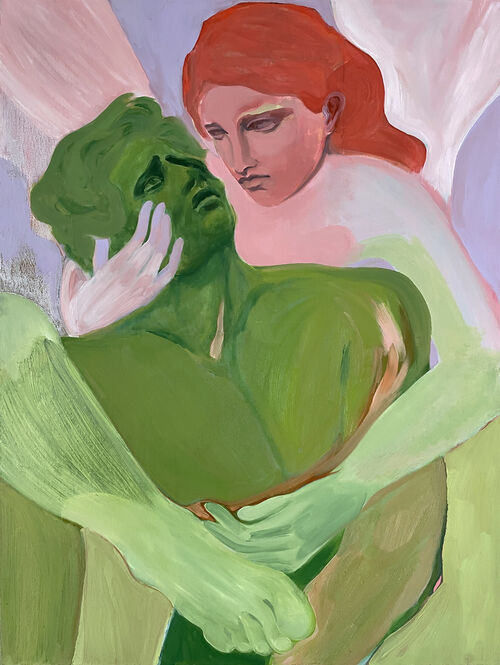 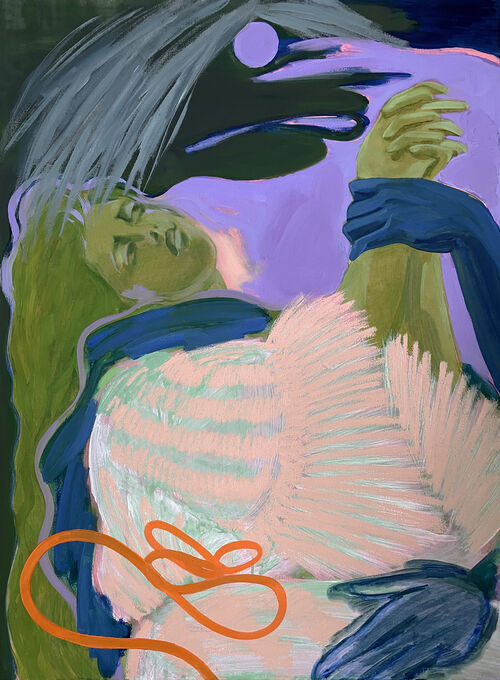 Beager continues to develop her practice, incorporating line work and layering to further amplify hidden narratives. Her recent work experiments with texture through the use of paper and fabric collage. With an impressive succession of shows under her belt, Beager has earned her title as one to watch in 2021. 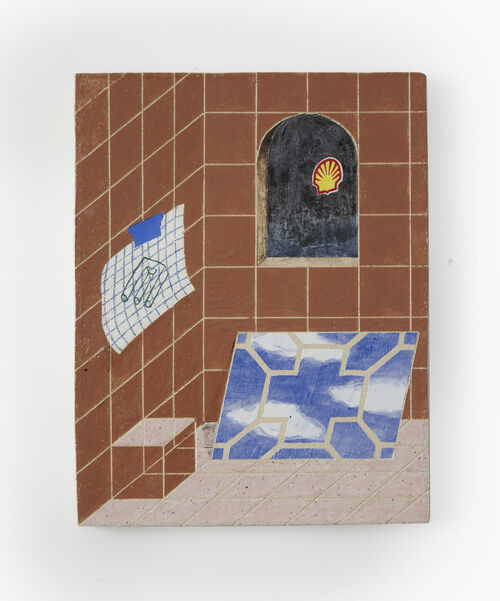 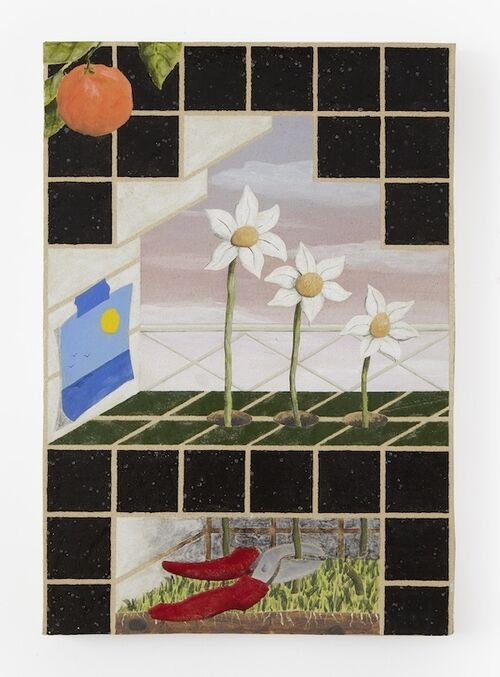 Could this be my swan song, 2020.
Gustav Hamilton
David B. Smith Gallery

In his delightful ceramic paintings and sculptures, Gustav Hamilton weaves together imagined narratives based around his own past works, family heirlooms, and the works of artists he admires, like Ron Nagle and Jun Kaneko. His recent solo show at David B. Smith Gallery in Denver, Colorado, “A Sucker for the Souvenir,” featured ceramic paintings—the works Hamilton is becoming best known for—brimming with deft trompe l’oeil details and other tropes plucked from art history. These handmade stoneware panels, each one a sort of large, glazed tile featuring still lifes and domestic interiors, are playfully self-referential: They feature the ubiquitous ceramic tile, with floors, walls, kitchen counters, sills, and alcoves lined with those familiar, manufactured squares. 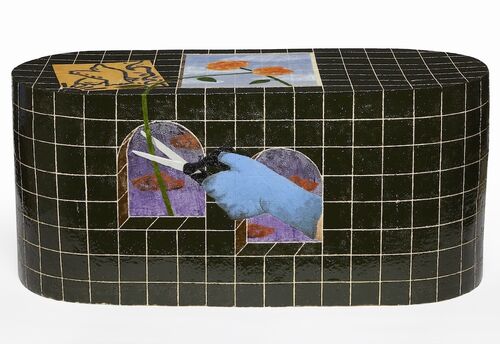 The table with the flowers, 2021.
Gustav Hamilton
David B. Smith Gallery

Hamilton’s three-dimensional works embrace a similar language of tiles, optical illusions, and art historical nods. Last fall, he put on a one-day show with Zoe Fisher Projects, where he staged a series of sculptural tables in a Brooklyn park. With works that were equally inspired by Magritte and the artistic antics of the classic Looney Tunes character Wile E. Coyote, the show offered a brief moment of surrealistic escapism.

An MFA grad from New York State College of Ceramics at Alfred University—known for its prestigious ceramics program—Hamilton is now based in New York, where he also teaches ceramics. Recently, he’s expanded his practice to painting.

B. 1970, Belfast, Northern Ireland. Lives and works in London. 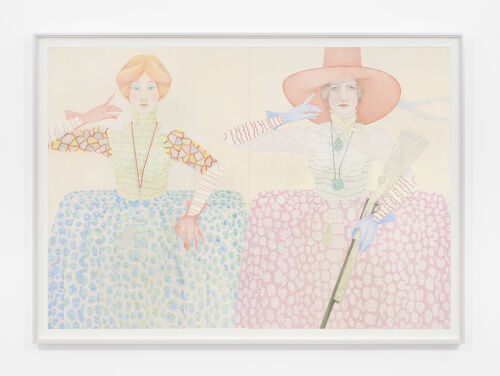 In Donna Huddleston’s ethereal images, femininity is edged with threat. In All Nighter (2019), a pair of scissors is pictured with its blades open, as though mid-cut. In Costume Drama (2020), recently featured in Artsy’s “Newly Represented” online show, a woman in a hoop skirt and wide brim hat holds a rifle at her side. Working in silver point, Caran d’ache pencil, and gouache, Huddleston’s softly rendered, pastel-hued drawings hint at domestic interiors and quiet dramas. 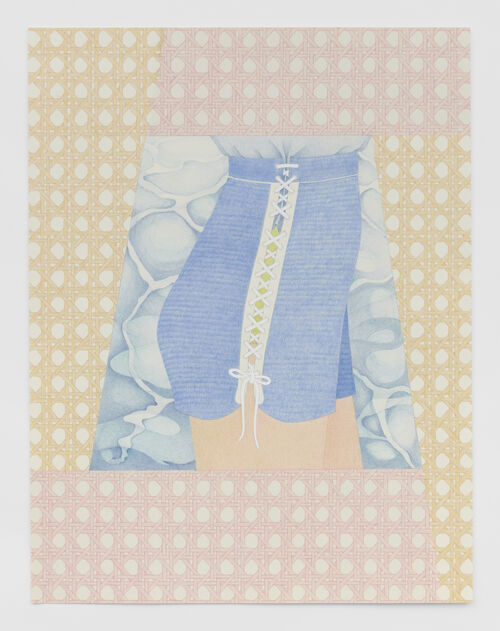 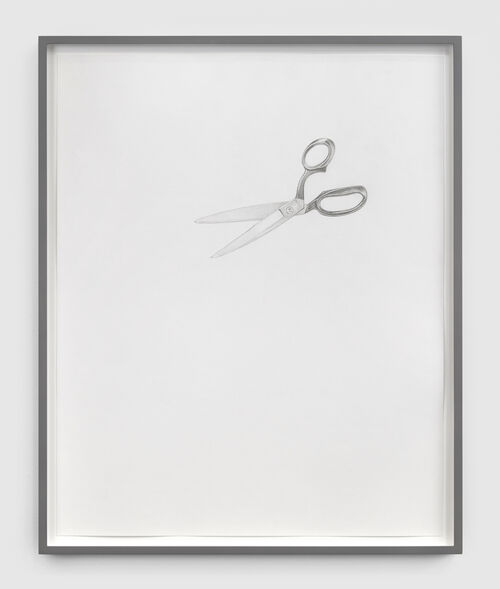 Huddleston’s background in theater design contributes to the careful composition and sense of balance in her work. Born in Belfast, the artist grew up in Australia, where she studied at the National School of Art in Sydney, and is now based in London. Her work has recently gained attention following her 2019 solo show “The Exhausted Student” at the Drawing Room and her new representation with Simon Lee Gallery, which will host her forthcoming solo exhibition later this year.

B. 1988, Pasadena, California. Lives and works in Los Angeles. 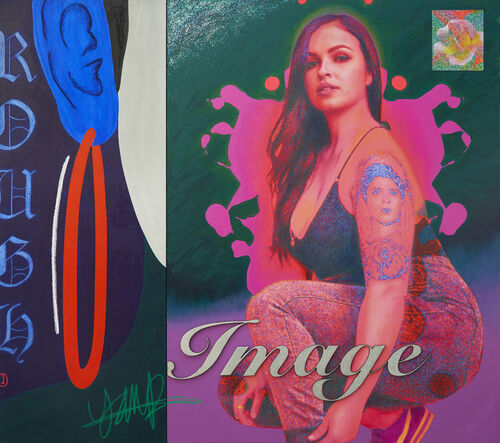 In Gabriella Sanchez’s mystifying collage paintings, the artist’s femme-identifying friends and family hold the viewer captive. Her current solo exhibition, “Rough Renderings of Sharp Images,” on view at Taymour Grahne Projects through June 5th, offers a reprieve from the voyeuristic portraits of the female form that audiences are used to.

Informed by a background in graphic design, the artist’s mixed-media works are marked by a distinctive aesthetic: scrawled tags in Sharpie, painted Helvetica fonts, images that tiptoe between figuration and abstraction, and references to art history that invite the viewer to solve the sprawling, puzzle-like paintings. By intentionally leaving the faces of her loved ones clean of abstraction and saturating the bodies and background with colors and texture, Sanchez maintains the women’s privacy and reveals only what her subjects want to reveal. 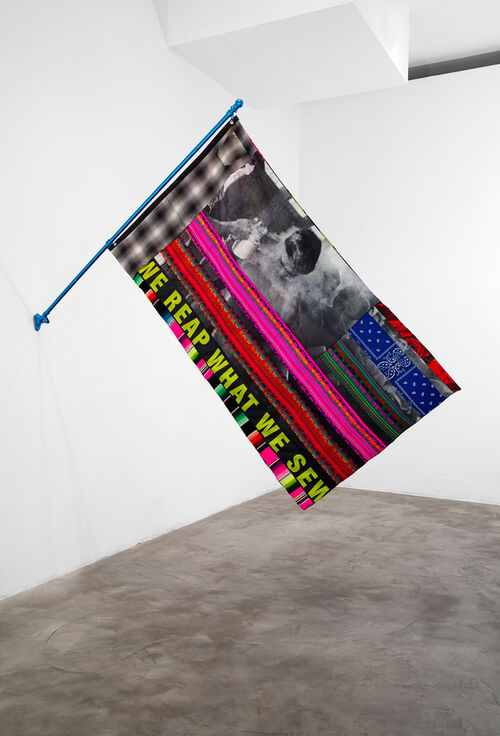 WE REAP WHAT WE SEW (Past and Present Patterns), 2020.
Gabriella Sanchez
Taymour Grahne Projects 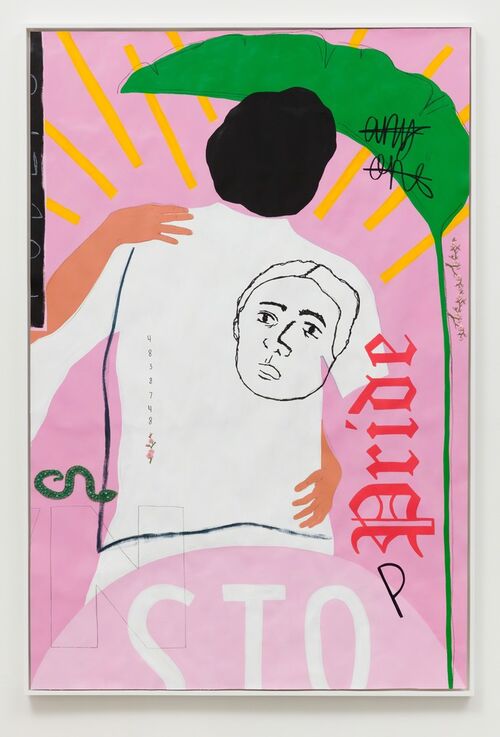 Sanchez’s enticing visual language recalls the wry photomontages of John Baldessari, yet at the same time, she subverts viewers’ expectations of the subject and object in portraiture.

Sanchez received her BFA from Point Loma Nazarene University in San Diego, California, in 2011. Since 2017, she has been showing with the Los Angeles–based Charlie James Gallery, where she had solo shows in 2018 and 2019; the gallery also showed her work in presentations at Frieze Los Angeles and The Armory Show in 2020. In 2021, Sanchez will have a solo show at the Museum of Latin American Art in Long Beach, California, and her work is currently featured in “View From Here: Recent Acquisitions” at LACMA. 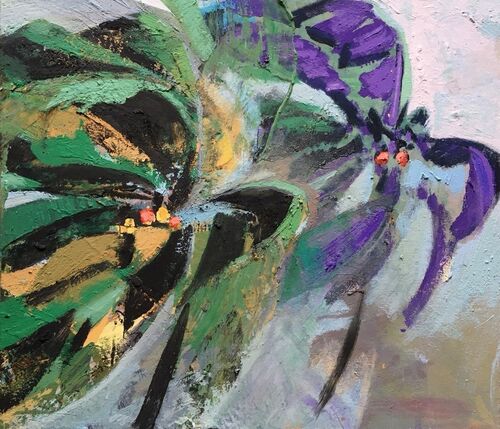 Inspired by the landscape and people of his native Trinidad, Che Lovelace paints abstracted figures, flora, and fauna that celebrate the spirit of his country. In particular, central to Lovelace’s work is Trinidad’s annual Carnival, known as Mas. His figurative paintings often depict masqueraders dressed as the traditional characters of Carnival, such as the Blue Devil.

To better embody the essence and movement of Carnival characters, Lovelace will stage performances and use video footage from them as reference imagery for his paintings. From a palm tree blowing in the wind to a masquerader dancing down the street, Lovelace has a unique ability to translate motion through painting. 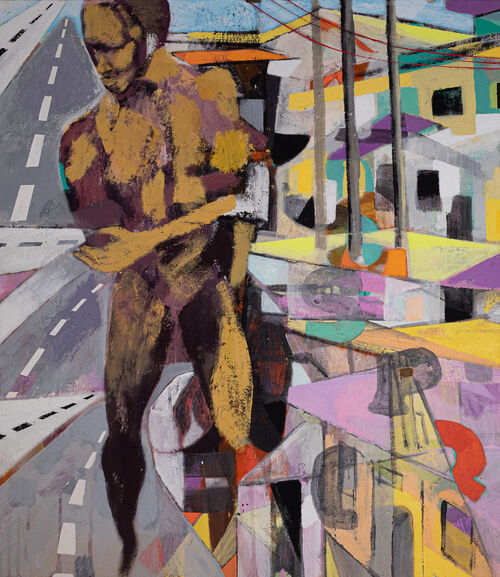 When the Sun Came Out, 2020.
Che Lovelace
Various Small Fires 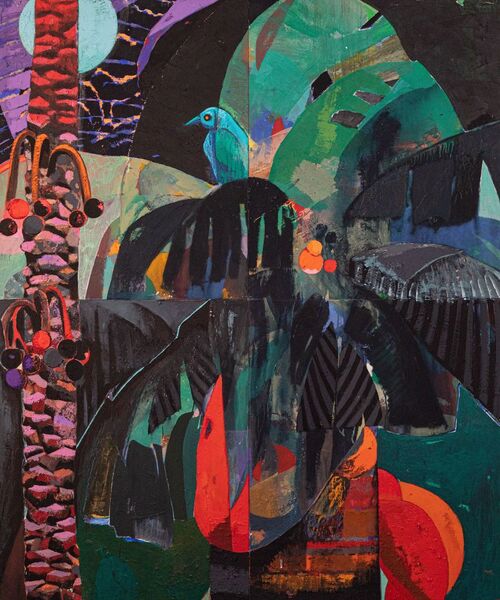 Lovelace recently held his second solo show in the U.S. with Various Small Fires in Los Angeles; his first was held in 2017 at Half Gallery in New York. The works from his recent exhibition were met with a flurry of inquiries on Artsy. Lovelace’s paintings were recently featured in Artsy’s “Newly Represented” show with Various Small Fires, which started representing him in 2020.

PrevPreviousRome’s Colosseum to Get $22.2 M. Gladiator Floor Upgrade
NextEditors Picks: 11 Events for Your Calendar This Week, From a Chess Grandmaster at the Rubin to a Modern Spin on Artemisia GentileschiNext
On Key

Art is the best gift, isn’t it? Do you like bears? Look at these tiny ears and tails! Aren’t they sweet candy? Stainless steel is a sample of minimal contemporary sculpture.

Pop culture is always changing and never stops evolving. There are different movies, music genres, songs, and characters that shape our culture and they change every year, if not every month. However, certain characters stay with us for a long time. Like Disney, Pokemon, Dragon Ball, and many others. Artist Alex Solis decided to take

LOVING WHATEVER IT IS that you clutch to your chest and call “art” means taking some care of the culture around that word and its objects. It’s a positive gesture to some kind of eternity. It means