In this series, our Curatorial and Editorial teams offer a look at the auction lots we’re currently watching on Artsy. This selection includes hidden gems, popular works with the most bids, and promising lots from the latest auctions. Browse all of the auctions on Artsy, including lots by artists you follow, here. 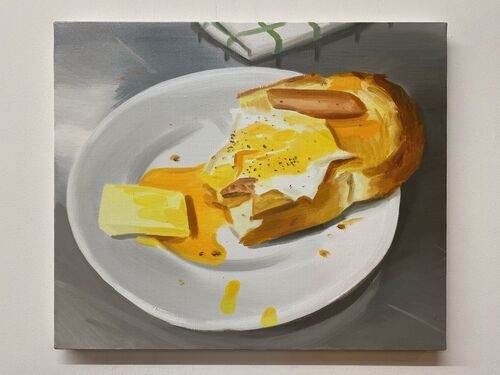 This work by Ulala Imai in Printed Matter’s benefit auction has already received more than a dozen bids, quickly surpassing its $3,000 estimate. Imai, who’s had numerous solo shows in Tokyo, has maintained a large following in Japan for her soft renderings of comfort food and familiar objects. Her popularity is now expanding internationally. This past March, Imai mounted her first U.S. solo exhibition, titled “Amazing,” at the Los Angeles–based gallery Nonaka-Hill. Her work was also recently included in The Hole’s group show “Nature Morte.” 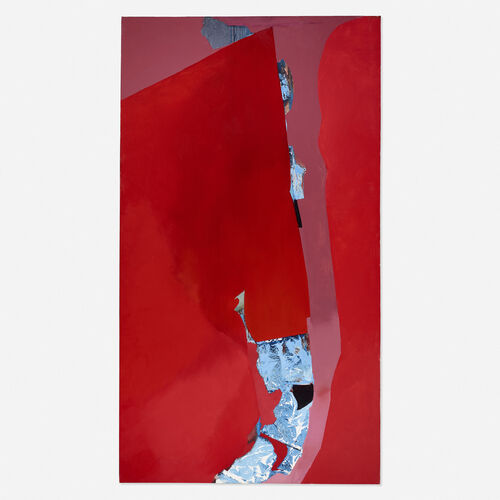 At seven and a half feet tall and over four feet wide, this monumental work by Dorothy Hood is an excellent example of the artist’s bold, uninhibited approach to painting. A pioneer of modernism—and one of the few women practicing at such a large scale at the time—Hood was active in the artist community that flourished in Mexico City during the mid–20th century. She befriended and worked alongside Frida Kahlo, Leonora Carrington, and Diego Rivera, among others. As the title suggests, this painting is an homage to the Abstract Expressionist painter Arshile Gorky, a contemporary of Hood’s who died young yet left an indelible impact on Surrealist artists of his time. Tough Homage to Arshile Gorky is available in the sale “Rago Auctions: 20 | 21” with a starting bid of $20,000. 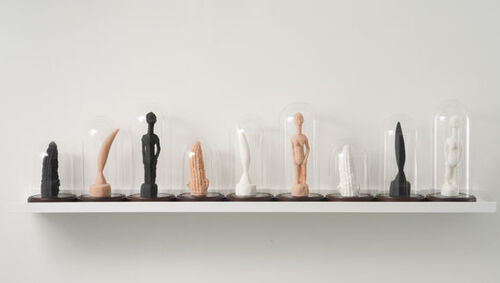 Candice Lin’s Dildos (Corn Hill, Queen Victoria, Bird in Space) is a provocative meditation on American modernism and the perverse tradition of Western imperialism. In her work, Lin utilizes a combination of materials to address historical events, frequently exploring the violent history of colonialism and its impact on ancient ritual practices. With this work, Lin repeats the motif of an ear of corn, a Constantin Brâncuși sculpture, and a Yoruba carving of Queen Victoria, placing nine individual sculptures—silicone dildos—in their own glass jars. The series of sculptures is now available in the auction “Tajan: Contemporary Art” with a starting price of €2,800. 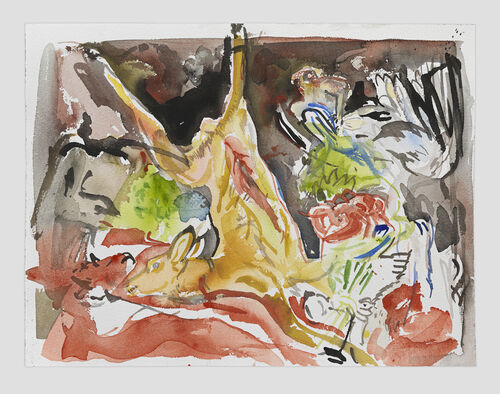 London-based painter Cecily Brown creates striking work that blends figuration and abstraction while radiating energy. Although she has been compared to Willem de Kooning and Joan Mitchell for the way her work recalls Abstract Expressionism, Brown has a distinct practice that evades simple categorization, making her work all the more appealing. Last month, Brown’s painting Twice Told Tales II (1998) sold at Sotheby’s for £620,000; and last year, Gagosian sold Brown’s painting Figures in a Landscape 1 (2001) for $5.5 million, the second-highest price paid publicly for one of Brown’s works. Untitled (After Snyders) (2020), a delicate watercolor that speaks to the artist’s signature style, is available in Printed Matter’s benefit auction with a starting bid of $15,000. 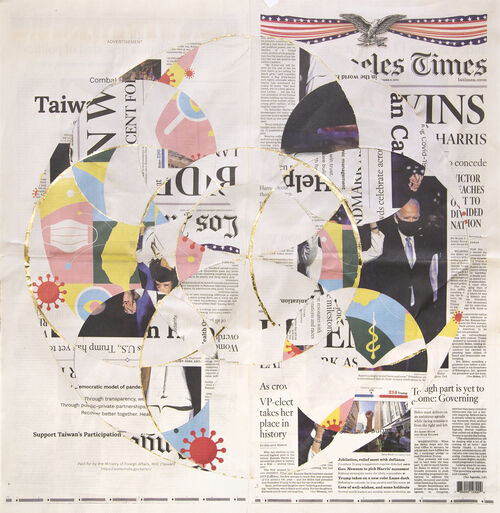 Walead Beshty is a prolific artist who regularly experiments with different modes of production. In the last decade alone, Beshty has had more than a dozen solo exhibitions at major art institutions around the world, including the Barbican in London and the Musée d’art moderne et contemporain in Geneva. His innovative use of photography, sculpture, and installation has catapulted him to international acclaim, and his ever-evolving practice ensures a captive audience. Blind Collage (Seven 180° Rotations, Los Angeles Times: Los Angeles, California, Sunday, November 8, 2020) is a carefully cut and assembled newspaper collage with gold leaf, up for auction in BOMB’s 40th-anniversary benefit auction with a starting price of $10,000.

John Baldessari, Throwing Three Balls in the Air to Get a Straight Line (1973) 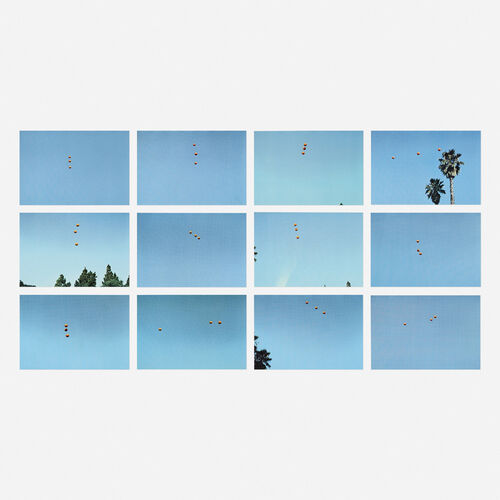 Throwing Three Balls in the Air to Get a Straight Line, 1973.
John Baldessari
Rago/Wright

Considered a founder of conceptual art and an influential tour de force of the West Coast art scene, the late John Baldessari captivated the art world for several decades. He worked primarily with photography and found images, making collages, assemblage pieces, and warped narrative works that celebrated the elasticity of artistic media. Baldessari’s 1973 piece Throwing Three Balls in the Air to Get a Straight Line—an edition of which has already attracted two bids in “Rago Auctions: 20 | 21”—is an apt representation of the artist’s inclination to expose the fallible connection between art and documentation. Another edition of this work sold at Christie’s last month for €10,625. 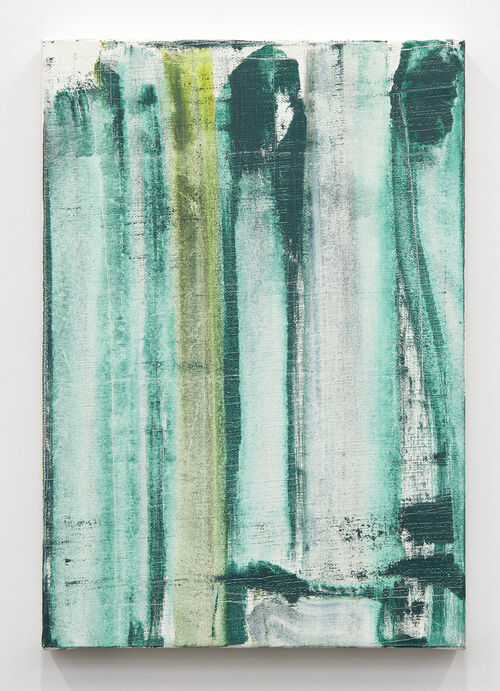 This recent work by Louise Fishman, whose career has evolved from Minimalism to textile arts and back to painting, is made in an expressionist style that is typical of Fishman’s recent work. The thin coat of paint used to make the sea-green strokes exposes the texture of the canvas below—a technique she did not employ until late in her career—and emphasizes the marks made by the brush. Despite the male-dominated sphere of Abstract Expressionism, Fishman has cemented her place in the genre through her distinct approach to painting. Triumvirate is available in BOMB’s 40th-anniversary benefit auction with a starting price of $17,000. 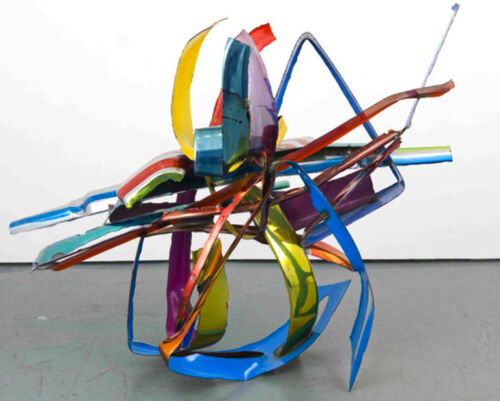 Noogatory—a painted and chromed steel sculpture—is a wild yet dazzling piece by John Chamberlain that reflects colorful light from all angles. Available in the Artsy x Seoul “Mixed Media” auction with a starting bid of $190,000, it is a rather elegant and delicate piece in contrast to some of the best-known works of Chamberlain’s “Car Sculpture” series. Instead of thick slabs of dented car metal clumped together, Noogatory is composed of multiple thin pieces of metal, pieced together in a balancing act that allows air to flow freely through the negative space. 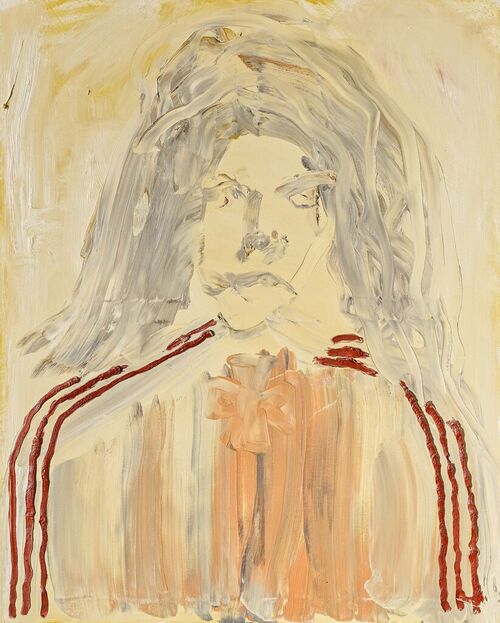 Berlin-based artist Jonathan Meese does not shy away from producing controversial work. The artist recognizes the power of art to draw attention to societal ills: He is known for his vibrant paintings, evocative performances, and installation work that often comment on Germany’s dark history, as well as the ideology of dictatorship as a whole. This piece, Verschwende Deine Jugend, Balthus (jung), which translates to “Waste your youth, Balthus (young)”—and is currently for sale in the auction “Van Ham: Contemporary, Post War, and The Lauffs Collection”—references the disgraced Polish French modern painter Balthus, and points to the disturbing legacy of male artists wielding power in inexcusable ways. 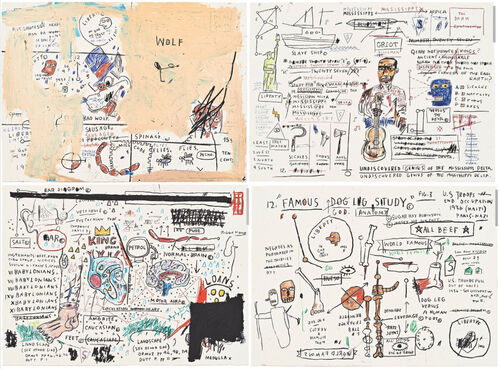 Jean-Michel Basquiat’s Wolf Sausage; King Brand; Dog Leg Study; Undiscovered Genius (four prints) is a portfolio of four screenprints that each depict vastly different subjects. Amid the rich detail, the prints share an overarching theme of meat processing, and Basquiat’s signature diagrams, text, and primitive representations of human figures abound. Works by Basquiat regularly exceed their high estimates at auction. Less than a month ago, Christie’s sold one of Basquiat’s Untitled acrylic and oil stick paintings for more than double its initial estimate. This lot, available from the Artsy x Seoul “Mixed Media” auction, has a starting bid of $60,000.

PrevPrevious8 Artists Who Had Breakout Moments This Spring Auction Season
NextDirector and Artist Robert Wilson Is Auctioning Off His First-Ever NFT: A Video Portrait of Lady GagaNext
On Key

Future Returns: A Plasma-Cut Forest Reclaims an Oil Tanker in a New Sculpture by Dan Rawlings

“Future Returns” by Dan Rawlins. All photos by Mark Bickerdike, shared with permission. In perhaps the not so distant future, sculptor Dan Rawlings (previously) imagines a world where machinery from the unsustainable energy industry is now a relic of the past, slowly overtaken by nature in a state of decomposition. In his latest sculpture titled Future

Late Journalist Janet Malcolm, Who Thought Artists Didn’t Have Anything Valuable to Say, Was Also an Artist—See Her Work Here

Janet Malcolm, the revered reporter, longtime New Yorker staff writer, and author of The Journalist and the Murderer, died on June 18 at the age of 86 from lung cancer. Though famed for her unflinching observations and truth-seeking ethos, Malcolm also worked quietly but devotedly as a collage artist and photographer for decades. She is said